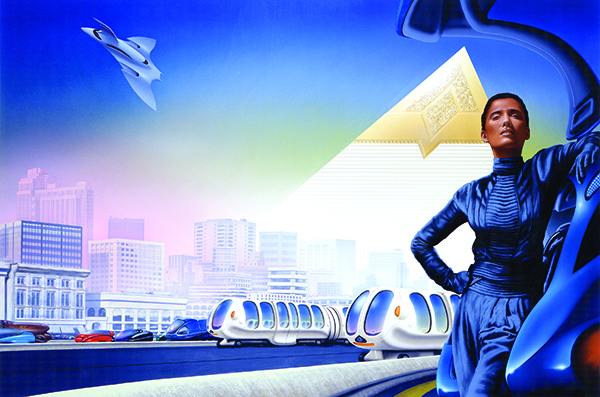 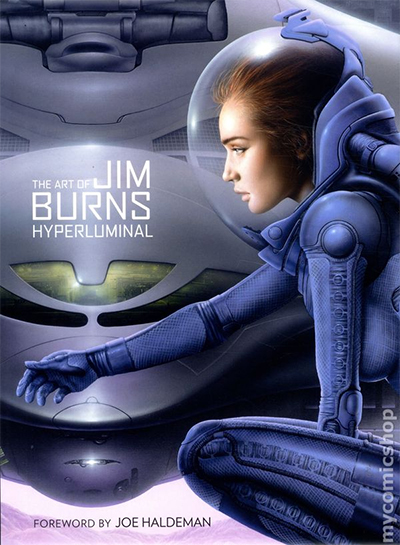 For me the golden age of science fiction and fantasy paperback illustration in the UK spanned the 70s and 80s. While 60s covers often favoured a minimalist Pop/Art approach the following decade saw an explosion of wildly imaginative and entrancing art, dominated by a handful of painters, each with a very distinctive style. New English Library’s magazine Science Fiction Monthly (1974) provided poster-sized copies to stick on the bedroom wall and although it started off mainly as a promotional tool for their own catalogue they were happy to include works by artists working with other publishers, such as Chris Foss (Panther) and Patrick Woodroffe (Corgi). While US trade paperback art often looked repetitive and clunkily unimaginative, the UK seemed to be enjoying a renaissance in imaginative art.

Of all the artists to emerge from this era, Jim Burns stood out in my mind as an artist who was equally at ease with the human (or not so human) figure and the titanic and beautifully seductive imaginary technology of the distant future. Even the most famous occasionally struggled with people. Bruce Pennington’s inhabitants of his surreal futures could look sketchy and ill-proportioned. If David Hardy and Chris Foss added people to their paintings they were usually tiny specs dwarfed by planetscapes or massive starships. Jim Burns, on the other hand, filled his canvases with a stunning range of meticulously realised characters, brought squarely into the foreground and imbued with such life and personality you felt you could engage them in conversation.

The Art of Jim Burns: Hyperluminal (Titan Books, 2014) is a gorgeously produced retrospective look at Jim Burns’ work from the 1970s to the present day. Still very active with commercial and private commissions, his paintings continue to hook the viewer into detailed and precisely composed alternate realities, usually dominated by one or more characters. Above all his work excels in capturing both a moment and a personality, and in this respect he is closest, in my mind, to the Pre-Raphaelite painters John Everett Millais and Edward Burne-Jones. There are three points of contact that I can see – composition and palette, the figure work itself and the idea of the tableau-vivant where a dramatic emotional moment is frozen in time.

I’ve been lucky enough to secure an interview with Jim as a companion piece to this post, and I don’t want to pre-empt any of his comments, which are far more illuminating than mine. However looking through Hyperluminal I see a constant tendency towards a limited palette and high contrast colours. For example blue/gold in Homuncularium (2010) or his cover for Greg Bear’s Slant (1998). As with the Pre-Raphaelites this has the effect of giving the artwork an intensely decorative look, which makes the figure work and characterisation even more striking. Jim Burns’ people (and elves and aliens) are about as far away from the gormless cookie-cutter people inhabiting the paintings of (say) the Brothers Hilderbrandt. Dramatic characterisation in SF and Fantasy art can often end up looking like comic-book caricature, a fault that plagued even such talented artists as Kelly Freas. Jim Burns’ cast in any painting are instantly living grown-ups believable both as people (or creatures) and in whatever baroque or hyper-realistic future they find themselves in. In the Victorian theatre the tableau-vivant occurred at points of high drama when the whole cast would freeze into the living picture. There’s something about Jim Burns’ paintings that captures this unusual combination of intense emotion/action and stillness. Two good examples of this are Ancient Light (1988) and one of my own favourites – Crucible (2003) (see the interview where Jim talks about Crucible in detail).

At a time when so much SF/fantasy paperback cover art smacks of derivative Photoshop clones of computer game box art (I’m getting tired of the endless copies of Assassin’s Creed), The Art of Jim Burns: Hyperluminal reminds us that, in the hands of someone who has clearly dedicated their entire professional life to perfecting a particular kind of vision and approach, the genre is as capable of producing great visual art as much as literature. It’s interesting that his work appears to channel so much Pre-Raphaelite sensibility as it was in that era when the distinction between Fine Art and Commercial Illustration was far more blurred than now. Great painters illustrated fantasy tales of King Arthur, Boccaccio and Shakespeare and the works they displayed at the Royal Academy were printed in the equivalent of coffee-table books for Victorian and Edwardian families to enjoy at home. In an age when art is dominated by sneering conceptualism – as much in hock to money as the most commercial art – Jim Burns’ paintings show that a meticulous attention to palette, composition and figure work can produce art of real beauty that is decorative and compelling as well as illustrative.

Jim Burns’ website is here where you can see some of his latest work and order prints.