In search of the perfect notebook

When I worked for Scotland Yard in the 1980s I had a Filofax, which was pretty standard for people living in London at the time. I took it with me to Japan and used it for all my notes and planning until it fell to bits, at which point I bought another. I still have it now, faded and battered, though I mainly use it for my notes on the memory systems of the Ancient Greeks and Romans.

When the first Palm Pilots turned up in the 1990s I became an instant convert and I went through several as new models came out, scribbling or tapping my notes onto the screen to such an extent that my actual handwriting started to look like the odd font used for character recognition by the first models.

Of course now we have iPads and smart phones with thousands of apps for recording data and taking notes. Yet like many people I’ve grown tired of using technology to record ideas and have turned back to pen and paper. There’s a number of reasons for this that other people have also talked about. Pen and paper don’t need batteries, you can drop a notebook on concrete and so on and so forth. Most of the notes and ideas that went into my Palm Pilot disappeared as the technology became obsolete and duplicating or backing up from one system to another became too much of a pain. Yet I can reach up and open the Filofax I bought twenty five years ago and my ideas are still in there. There’s also something liberating about working with a piece of paper and a pen that you don’t get with a computer. Even the biggest screen is filled with systems that seem to constrain thought, pushing it down narrow paths built by someone else.

So a few years ago I switched back to paper and pen for note-taking and started hunting for the perfect notebook. What I wanted was something that I could fill with ideas and pictures and would end up looking like Professor Jones’s diary from Indiana Jones and The Last Crusade, or the kind of journal usually found next to a pair of smoking shoes in a quiet corner of the Miskatonic Library, filled with Knowledge Man was Not Meant To Know, and cool pictures. It’s actually proved harder than I thought, there are loads of notebooks out there, but none of them quite right. Here’s my own assessment of a few different brands:

I thought of going back to this but the small ones are too small, and the A5 one weighs the same as a family bible and is therefore impractical to carry around. Interestingly, after the company struggled against the rise of the PDA in the 1990s, the Filofax is now enjoying a renaissance, especially among women. You can now get loads of ‘female friendly’ versions decorated Laura Ashley themes by those who think the cleverer sex really are into floral borders with pink undertones. 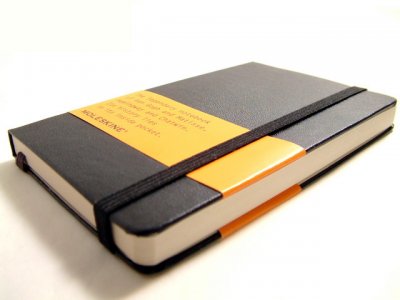 Moleskine set itself up as the first of the ‘quality’ notebooks, claiming that famous artists and writers like Hemingway used them (along with Professor Henry Jones). It’s all a bit of dubious marketing fluff, but they are nice notebooks, with a band to hold them closed and a paper pocket for receipts and tickets at the end. Sadly the quality is poor. The fake leather composite covers split at the seams and the paper is thin, which means ink pen bleeds through. Most of mine started to fall apart halfway through use, and I’m not that rough with them. 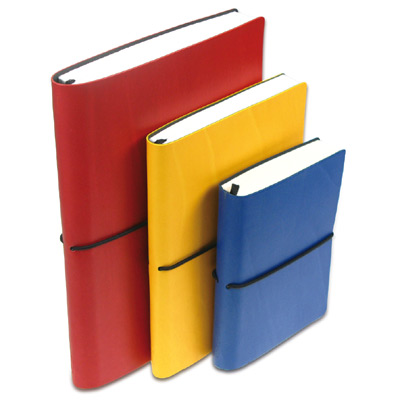 High-end notebooks mainly come from Italy, and the Ciak notebooks are beautifully made with thick leather covers and decent, cream paper. They’re almost perfect, and I love the bright colours, but they have rounded spines and don’t open flat. For me this makes them a real pain to use because either the right hand or left hand page (depending on where you are) bangs against your hand when you’re writing and has to be weighted or elbowed flat. 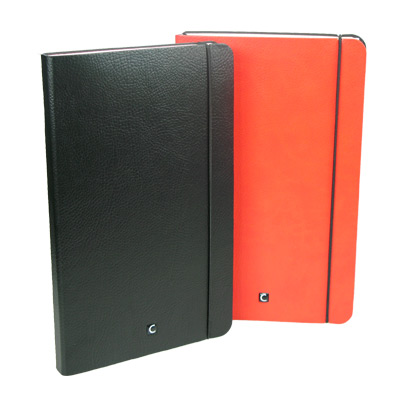 I really like Cartesio notebooks. They are very similar to Moleskine but better quality and more durable. However the paper thickness varies for some reason. The diaries are great, and I use a Cartesio for my daily journal, but the paper in the ordinary notebooks bleeds like anything when you use a fountain pen (I hate rollerballs and biros). This makes your thoughts look like a deranged Rorschach test, which is a pity because they are lovely jotters compared to Moleskine. If you don’t use an ink pen these are fine. 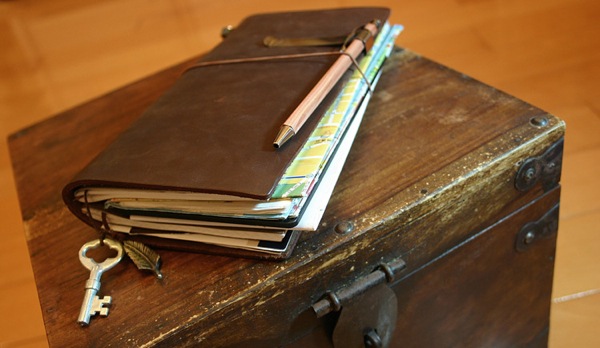 I think I might have finally cracked it with the Midori Traveller’s Notebook, a piece of Zen minimalism from Japan. Opening the box for the first time can be a bit underwhelming as you get a leather wrap-around cover (thick cow hide from north Thailand) with a notebook inside held in place by a coloured elastic band. The beauty lies in its customisability. You can easily add extra notebooks and inserts like plastic wallets and card holders, along with different types of paper, either bought or cut up by yourself. The Midori has a growing international fan club swapping ideas on how to personalise the journal, and displaying photos of their own notebooks. The grand master of notebook beauty is Patrick Ng, whose blog Scription, is full of fantastic suggestions on how to use the journal.

So I’ll let you know how I get on with the Midori Traveller’s Notebook and how well it accommodates Forbidden Knowledge and Ancient Lore. As an aside I’ve also been hunting for a decent fountain pen and after wasting time and money on swanky pens that either leaked or didn’t write at all, have settled for a £15 Lamy pen from Germany, which works perfectly.

All the journals mentioned above (apart from Filofax) can be bought in the UK from The Journal Shop, who provide great service and often run 3 for 2 deals.