How not to write a novel 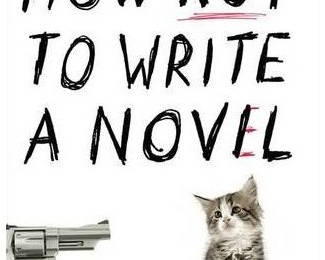 “The architect admired the way the way the building was crafted; it was all stone with curvy arches like an old church.”

The shelves are full of books on how to write. As I hinted at in the last post, very few of these are written by people who’ve been wildly successful authors (a notable exception being Stephen King’s On Writing: A Memoir of the Craft). Most books either state the obvious, or offer up a ‘system’ that, like Dramatic Pro, will ‘guarantee’ a fully-formed and rich narrative that’s instantly marketable.

How not to write a novel by Sandra Newman and Howard Mittelmark is a wickedly funny antidote to most writer’s self-help books. Instead of offering tips on how to create plots and characters the authors have listed two hundred examples of the mistakes writers, both new and established, routinely make. For each one they’ve written parodies of the worst examples, some of which are blatantly obvious: “As he passed the mirror, Joe noticed the blond hair and square-jawed features that had always won him attention from the girls”, some of which you’ll recognise from the pages of well-established writers, for example ‘Stag Night’ – where all the characters are male until the protagonist suddenly decides he wants to get laid – a scenario that pops up all too often in both books and films.

For once the writers have decent credentials – Sandra Newman’s debut novel, The only good thing anyone has ever done, was shortlisted for the Guardian First Book Award, and Howard Mittelmark is an editor of considerable experience. What sets How not to write a novel apart from most is the humour. Books on how to write can be desperately po-faced (The Craft of Novel Writing, by Dianne Doubtfire, for example, claims that novel writing is like giving birth, and talks about the product as ‘your baby’). Newman and Mittelmark’s guide, by contrast, is laugh-out-loud hilarious in places, and judging by some of the sniffy reviews on Amazon has touched a raw nerve with quite a few Adrian Moles who can’t understand why their version of Lo! The flat hills of my homeland is still being rejected.