Future Past – Worlds of If 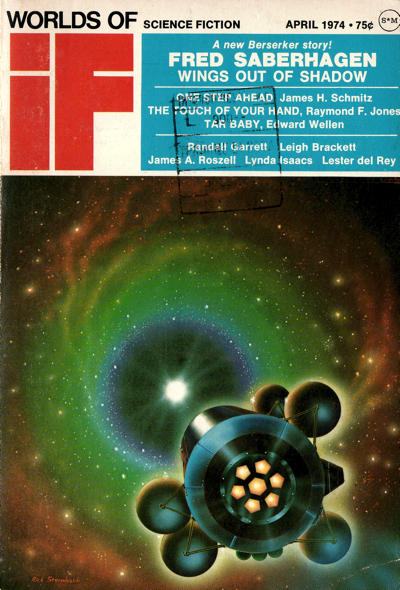 I first came across the magazine Worlds of If in 1974, in a little news kiosk on the Via Veneto in Rome. It was amongst a bunch of comics with covers showing naked women having their legs ripped off by zombies, which apparently is a peculiarly Italian genre. I was just getting into Science Fiction via the British magazine Science Fiction Monthly and had heard of the rich legacy of American magazine SF. For me at that time reading science fiction meant I was growing up, away from comics into an adult world of ideas about the future, human emotions, sex and violence. Being on holiday with my dad was a good thing, as I went away with Worlds of If April 1974 and not Zombies strappare la gamba di una monaca (I’m guessing the title with the help of Google Translate). Above is the cover of that very same If, complete with the vendor’s stamp. It was 900 Lire.

Worlds of If ran from 1952 to 1974, from the same publishing house as Galaxy. It never reached the same standard as its sister magazine, but it printed some famous stories nonetheless, including James Blish’s A Case of Conscience and Harlan Ellison’s short story “I have no mouth and I must scream“. Personally I always preferred Worlds of If, the cover designs and artwork were bolder and unhampered by the big borders of the Galaxy magazines. The stories seemed more quirky and less self-important. 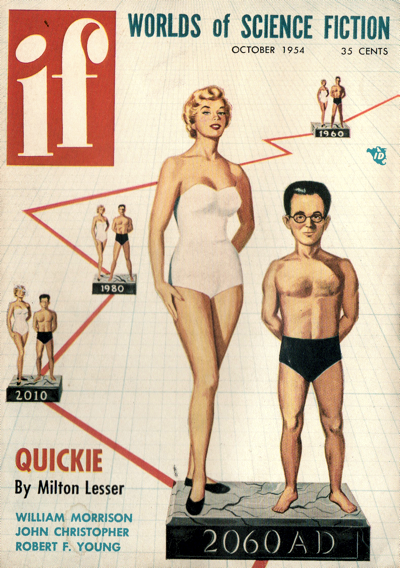 Like many science fiction magazines Worlds of If would often have a guess at the World of Tomorrow. This particular cover is called ‘Comparison of the sexes, 2060 AD’, suggesting that either men will have shrunk and have mighty heads or women will have grown to the point where they crack the concrete they’re standing on. For those of you thinking we still have 48 years to go check out the couple at 2010 AD, where the height differential is such that the woman could comfortably rest her pointy 1950s boobs on the man’s shoulders. 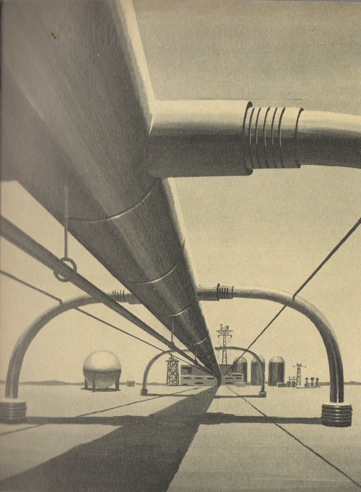 A slightly more prophetic picture is this one, which shows an Atomic Power Plant of the 1970s. The caption firmly asserts that such an installation

must be perfectly built – never any repairs! – because deadly rays prevent anyone from entering after it is put into operation. Breakdown would force complete abandonment of the plant.

When I bought that copy in 1974 the writing was already on the wall. Worlds of If‘s declining sales, the competition from the paperback market and the rise in paper costs mean that the December 1974 issue was the last. After that it merged with Galaxy, which sailed gamely on until 1980 when it too folded. There was a brief attempt to resurrect the latter in the mid 1990s but it only lasted 8 issues.

I’m the proud owner of a complete set of Worlds of If, from 1952 to 1974, thanks to Books from the Crypt, a fantastic online store for old pulps and magazines. They only take up a couple of shelves but they stretch from the Korean War, through the 60s and into the era of Vietnam. Like most SF they tell us more about the period they were published in than the future, though in a roundabout way they managed to hit Atomic Power Plants on the head.