Frontiers of Space – in memory of Neil Armstrong 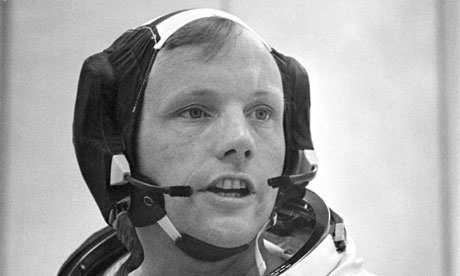 For me the years 1968 – 1969 were a perfect storm for three reasons. Firstly I saw Stanley Kubrick’s 2001: A Space Odyssey at the age of seven. Not only was I entranced by the movie’s images but also beside myself with excitement at the thought that I would be alive at the grand old age of 40 when the new century rolled around, and would experience all the things happening in the film (except, I hoped, the weird hippy bit at the end). Secondly my mum banned me from watching Star Trek because she thought it was rubbish. So my sole purpose in life became, surprisingly enough, watching Star Trek, when I wasn’t playing at being Mr Spock, because he was the one I most identified with.

The third reason was, of course, the moon landing. At 8pm on July 20th 1969 I sat in front of a black and white TV and tried to make out what was happening from those fuzzy images of Neil Armstrong climbing down the leg of the LEM to stand on the Moon’s surface. One worry at the time was that the surface might be dust to the depth of several meters so when he didn’t disappear into grey quicksand I was mightily relieved.

It’s hard to explain just how profound an impact the moon landings had on people (especially boys) who were my age at the time. Every newspaper, magazine, comic and toy store sold us a vision of a near-future space age. 2001: A Space Odyssey already revealed what it would look like, pretty much the same as our own 1960s but in orbit. My dad was an architect and interior designer and we already had some of the Scandinavian designed chairs and tables that littered the interior of Kubrick’s space wheel. This was the beginning of the road that would take us at least to a moon colony, and probably the exploration of Mars.

What the future should have been. I used to eat my tea off tables like those.

Of course it never happened, and now the moon landings are history, along with the sleek formica and steel interiors of my childhood home.

In 1985 J. G. Ballard published a story ‘The Man Who Walked on the Moon’ in Interzone. In the tale the narrator meets a beggar in Rio de Janeiro who claims to be an Apollo astronaut and who scrounges money from tourists in return for tales of his experiences. When the man dies the narrator takes his place. The UK adult comic Viz did a hilarious but poignant fake newspaper report about Armstrong, Aldrin and Collins in their post-Apollo 11 days re-forming as a comedy act called The Astronutties and performing out-of-season pier-end shows in faded UK coastal resorts. Finally here’s an intriguing anecdote by the SF/Fantasy writer Lucius Shepard about a possible encounter with Armstrong at the Neil Armstrong Museum where, according to the curator, he occasionally liked to sleep in their model of the lunar lander.

These tales carry a strong resonance for me because, in true Ballardian fashion, the remaining Apollo astronauts have become living ghosts of a future that was dead long before the last LEM touched down on the moon. Staggeringly brave, resourceful and intelligent men, they really were heroes in all senses of the word. For this reason they seem out of place in a world where manufactured celebs make up our media pantheon and ignorance is seen as cool. When I was eight I wanted to be an astronaut. Now kids want to be celebrities, but with no idea what they will do to become one. 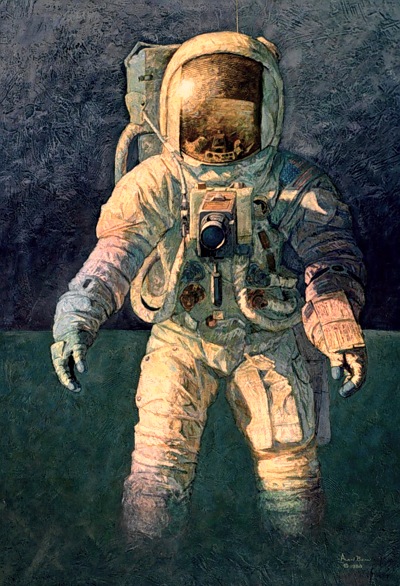 ‘That’s How It Felt To Walk On The Moon’ by Al Bean, Apollo 12 astronaut.

Andrew Smith’s book Moondust: In Search of the Men Who Fell to Earth is a wonderful series of interview-based portraits of the Apollo astronauts, each one a very different personality and each one affected in a different way by their adventure. My favourite is Alan Bean from Apollo 12. He has spent a lot of his post-space days repeatedly painting scenes of astronauts on the moon, and you can see his work online at the Alan Bean Gallery. Other astronauts found god, became obsessed with the paranormal or suffered from alcoholism.  Neil Armstrong simply kept himself to himself. By all accounts he saw his own role as minor in the context of the vast efforts that put him at the foot of the LEM’s ladder, and refused to condone the hagiography that surrounded him. Yet the first man on the moon wasn’t quite the mad recluse he was sometimes made out to be. This TV profile shows that he was perfectly happy to give detailed answers to intelligent questions in a 60 minute interview.

In 1969 I had two books, Manned Spacecraft and Frontiers of Space. The first one covered spaceflight up to that point. The second one foretold the future. What made it different from other books of this kind was its rigorously serious engineering focus. It tried, in all seriousness, to predict what would come after Apollo, based on the various projects then sitting on NASA drawing boards. The text was too dry and confusing for an 8-year old but the pictures were entrancing and entirely believable. Here are a couple of two-page spreads showing the next stages of moon and Mars exploration. The execution is scrappy but I didn’t care, to me this was my future. 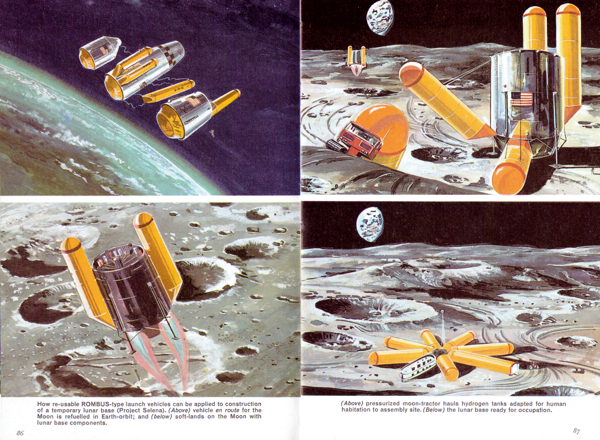 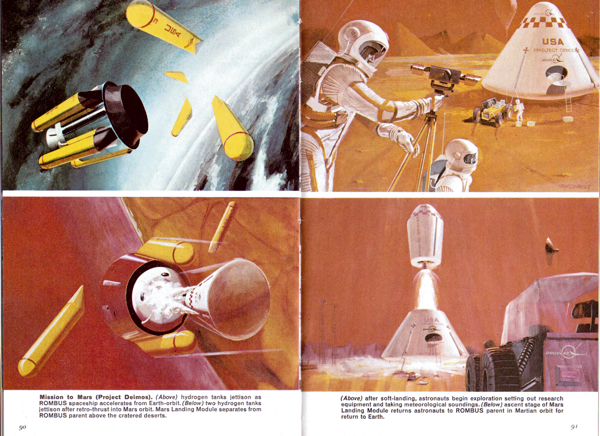 For a fascinating account of how the dream of the space age was destroyed by NASA bureaucracy and Senatorial pork-barrel politics have a look at Lost in Space: The Fall of NASA and the Dream of a New Space Age by Greg Klerkx

I used to say that I didn’t want to die until I’d seen an astronaut on Mars. I don’t think that wish will come true. The way I see it now is that the Apollo missions were like Leif Erickson going to America in the 11th century. Viking exploration budgets and project management expertise weren’t really able to exploit the discovery and it was a few centuries before Europeans went back. We will send astronauts to Mars and those other places, but it may be a few hundred years away.