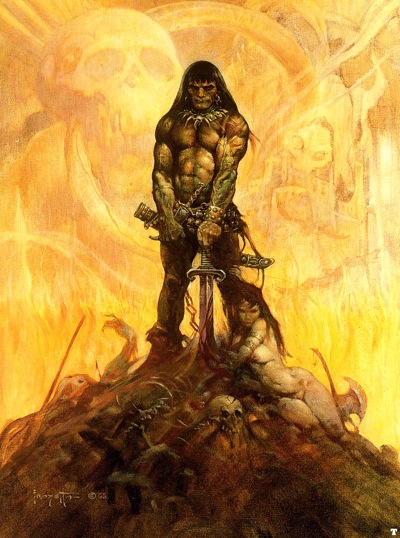 I’m still waiting for Conan. The first Arnold Schwarzenegger film was kind of OK, and had one or two impressive moments. The second was dire and I still can’t bring myself to watch the remake with Jason Momoa (despite the fact that his Khal Drogo is as close to Conan as anyone – though Rory McCann’s Hound comes a close second). The problem is that for me Conan is Frazetta’s Conan, an ugly vicious bugger with a face like Les Dawson’s Cissie Braithwaite. Arnold Schwarzenegger and Jason Momoa are simply too clean and pretty, like cosplay fans oiled up and tanned for the next fantasy con. Conan’s world is, to my mind, the world of Nicolas Winding Refn’s Valhalla Rising, all cryptic utterances, bleak moors and your own innards falling into your lap – and only Frank Frazetta comes anywhere close to the capturing the visceral darkness of Robert E. Howard’s original tales. Everyone else seems a wee bit feeble in comparison.

This week I downloaded the documentary Frazetta: Painting with Fire (2003) from iTunes. Like many documentaries coming out of the U.S. it leans towards simplistic hagiography, but once you get past the ‘Frank was the most wonderful person in the entire cosmos ever’ comments that bookend each chapter of the film the contents are eye-opening. On the outside Frazetta looked like another example of that peculiarly American phenomenon, the cowboy artist. Ruggedly good-looking with an easy smile, dressed in Levis playing baseball, he resembles Jackson Pollock – an icon of US artistic freedom encouraged by the CIA to counteract Soviet culture (if you think I’m being ridiculous here, the CIA funded the New York Museum of Modern Art in the 1950s as part of their propaganda war against communism). 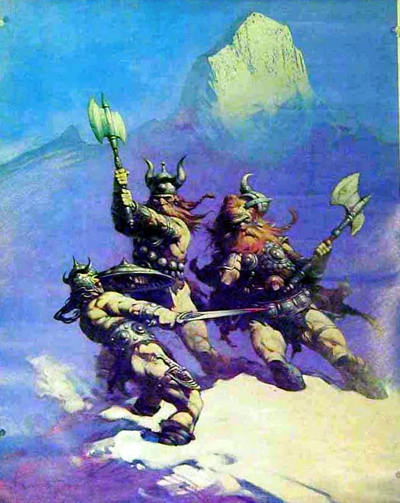 One thing the documentary does bring home is the revolutionary nature of his paintings. More than any other fantasy artist, he had the uncanny knack of capturing a perfect instant of pure action and emotion. Some of the remarkable claims to emerge from the documentary are that he didn’t really have a formal art training, which is very hard to believe looking at his figure work, and that he worked at incredible speed entirely from his own imagination. Once the image lodged itself in his head then he would crank it out in eight to fifteen hours.

It’s clear that the dynamic action shots that dominate his paintings come from his apprenticeship working as a ghost artist for comics like Tarzan of the Apes and Li’l Abner, and that his figure work is in the tradition of artists like Burne Hogarth (who produced wonderful textbooks on dynamic anatomy that are invaluable for illustrators and animators alike). The documentary argues that his intuitive grasp of anatomy in a state of extreme exertion also came from his own love of sports, including baseball and karate. What sets Frazetta’s fantasy art apart from the work of, say, Boris Vallejo and Chris Achilleos, is that it very rarely looks posed. 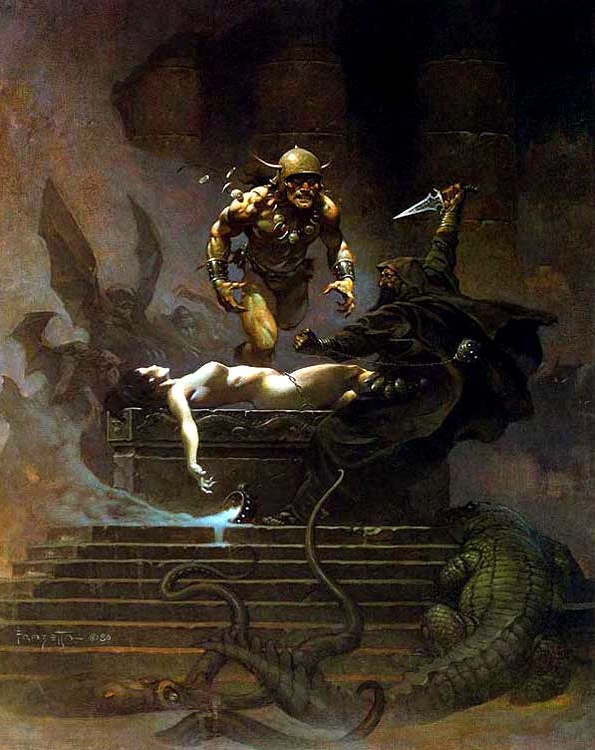 A painting like Sacrifice, for example, shows his ability to capture an instant with all its drama and emotion. Yet even though the first response of many is that his technique is photographic, it actually isn’t. He is essentially an Impressionist, working at speed (especially in oils) to give his pictures a loose, sometimes even abstract quality, and I think that is where the emotional power comes from. His compositions are often quite narrow (dictated by the aspect ratio of a paperback cover), frequently use a pyramid composition where everything piles up to a dramatic figure in the centre (often top-lit so that the features and lower body dissolve into shadow). Then, very rapidly, the imagery bleeds out into a patchwork of shadows and menacing figures half-glimpsed in the background, which might be real or just phantoms. It’s a very powerful combination that other commercial artists have found hard to match.

Admittedly his paintings of women are less assured than those of the men, his females are usually draped over scenery like large plumped-up cushions. While most of his men are clearly self-portraits (especially John Carter) his women often look like someone’s stuck the head of a twelve-year old girl on top of a stripper. Having said that, they are refreshingly chunky-looking, unlike the anodyne aerobics instructors of later imitators , and occasionally his action shots of heroines matched those of his heroes. Dejah Thoris’s bum in this painting of John Carter fighting the apes of Mars is a stroke of compositional genius. 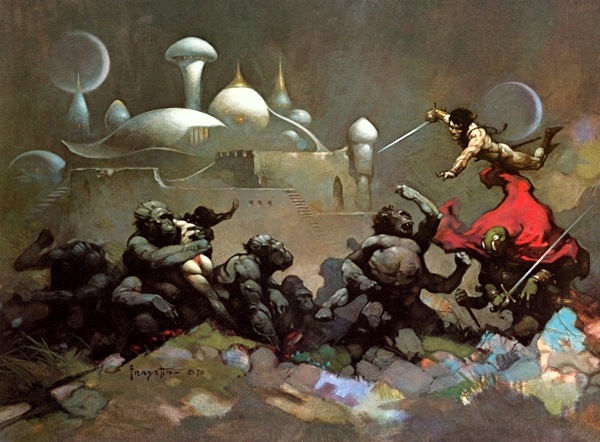 John Carter, Tars Tarkas, a load of Apes and a bit of Dejah Thoris 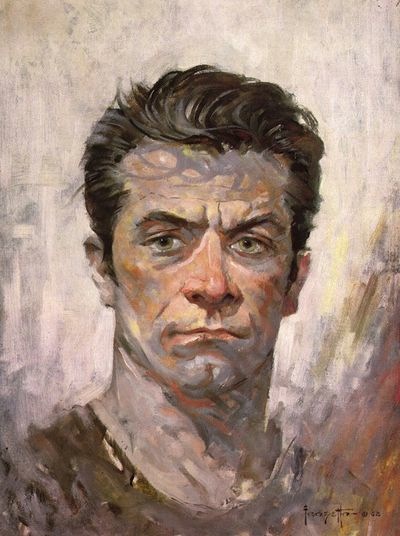 Frank Frazetta was an amazing artist by any standards, and despite his own aw-shucks self-deprecation, a surprisingly dedicated and focussed craftsman. After a series of debilitating strokes he taught himself to paint and draw with his left hand, and while he never matched the brilliance of his work in the 60s he managed to produce some pretty impressive watercolours. Perhaps one day someone will have the courage to bring his Conan to life in a serious reboot.