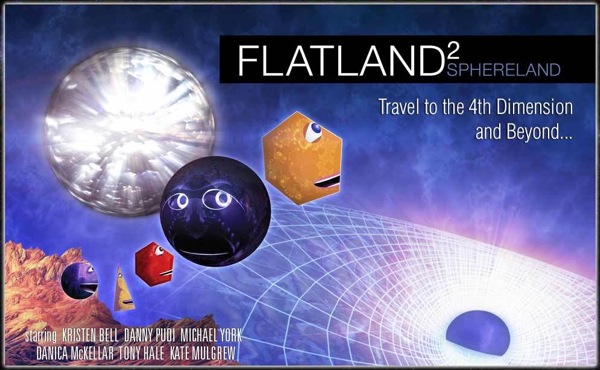 Flatland 2: Sphereland is the sequel to the movie Flatland which I mentioned in a blog post last year. It’s a charming 36 minute animated short based on the original novel by Edwin Abbott, and one of the book’s own sequels Sphereland: A Fantasy About Curved Spaces and an Expanding Universe, written in 1965 by the Dutch mathematician Dionys Burger.

The story takes place twenty years after the original, in which the Flatlander Arthur Square (Martin Sheen) and his daughter Hex (Kristen Bell) discovered the third dimension with the help of Spherius, a denizen of that realm voiced by Michael York. Her grandfather is now dead and Hex is ridiculed by the inhabitants of Flatland who still refuse to believe in the existence of dimensions beyond their own. Outcast from society, she waits for the return of the portal that will lead to the higher realms, and Spherius who has disappeared. At the same time the Flatlanders are preparing to launch a spaceship to take advantage of a rare alignment of planets in their flat universe.The ship will fly in a parallel line to the worlds so the crew can make observations.

However one of the navigators, Puncto, has found an anomaly. Whenever he triangulates the position of distant planets his triangle’s angles add up to more than 180 degrees, and the discrepancy gets bigger the further the planet, the implication being that the parallel course plotted for the ship may end up being anything but. Anyone with a familiarity with maths and geometry can probably figure out the reason why. If not, it’s another reason to watch the movie. The discovery about the true nature of the Flatland’s universe coincides with the return of Spherius and the revelation that there are even more dimensions beyond the third.

Flatland 2: Sphereland is aimed at the educational market, and so it’s very much a kid’s film punctuated by brief, but clear, explanations of fundamental principles of geometry. The felt need to make it appealing to contemporary students occasionally grates, although there’s less of the more irritating modern elements that crept into the first film (Flatland skateboards, the King of Lineland shouting ‘Dude you’re freaking me out’ when Arthur Square enters his world). The simple story has enough pace and tension in it to keep the audience engaged and the visual feel of the film is fantastic. Flatland is especially stunning and I loved the retro diesel punk rocket its inhabitants are sending into space. Indeed Flatland is more impressive than the third dimension, which serves up a fairly standard pageantry of abstract and semi-organic 3D landscapes.

Part of the story revolves around the discovery of even higher dimensions than the third. Spherius is visited by a denizen of the fourth dimension, an Oversphere (voiced by Voyager captain Kate Mulgrew). At this point the film becomes a little unstrung and confusing. Obviously the biggest problem is representing the Fourth Dimension, which Spherius visits. Apart from telling us that he can see the inside and outside of everything simultaneously, and showing us a lot of fluorescent floaty seaweed, the film avoids tackling any of the mathematics head on. Instead it gives us tantalising views of a Tesseract and a Clifford Torus before taking a left turn into the more science fictional world of the Multiverse, with multiple copies of the spaceship appearing each from an alternate time line. It may be that the filmmakers decided that multidimensional geometry was one step too far for its young audience and decided to go for the Sense of Wonder angle instead. It’s not a bad call, but it would have been nice to have had at least one mathematical principle of four dimensional space explained with the same clarity as the trigonometry lesson earlier in the movie.

All in all Flatland 2: Sphereland is a great little film, beautifully designed, very clever and adept at explaining most of the maths behind its straightforward but entertaining story. Unless you are a teacher looking to buy a school-wide license for $149.95 you’ll probably be content with the personal edition. This can be purchased as a DVD ($24.95) or digital download for instant viewing ($19.95) from the website here.