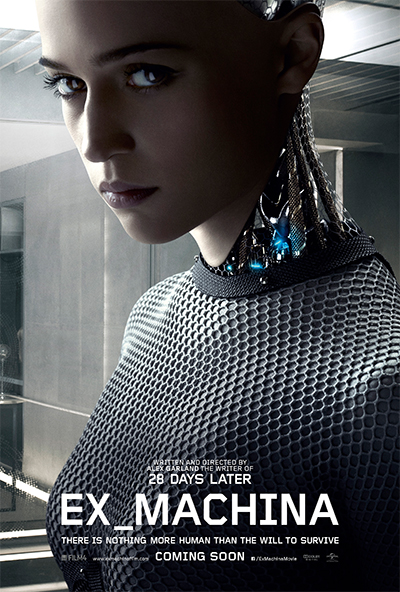 In many ways Alex Garland’s film Ex Machina treads the same ground as A.I. Artificial Intelligence (2001), I, Robot (2004) and The Machine (2013) in its portrayal of a robot trying to break out of its pre-programmed existence to become human. Geeky programmer Caleb (Domhall Gleeson – one of the Weasley brothers for Harry Potter fans) wins a competition to spend a week with the CEO of the  ICT company he works for in his retreat in the wilderness. When arrives he finds himself taking part in an experiment to see if reclusive control-freak Nathan’s (Oscar Isaac) latest invention – a robot called Ava – can pass the Turing test (i.e. can pass herself off as human in her responses during their conversations). At first the overawed and gormless programmer goes along with the process but very quickly things start to take a sinister turn and he finds himself caught up in an intricate game of feint and counter feint between his boss and the android, watched over by the former’s silent Japanese assistant, Kyoko. The tension is given an extra twist by Nathan’s bizarre house. All the doors are operated by electronic keys allowing Nathan to control Caleb’s access to the rooms – effectively turning him into a rat in a maze, or a prisoner when the power occasionally fails. 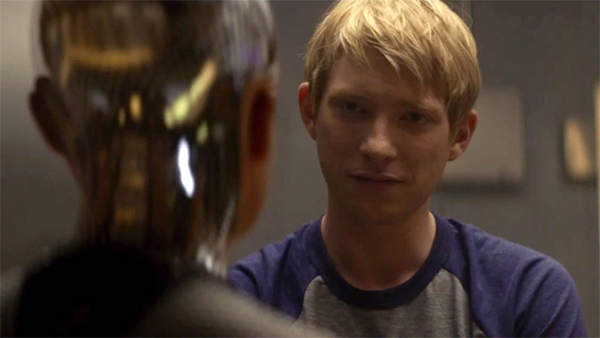 What sets the movie apart from its predecessors is that focuses less on the standard ‘Is she human or not?’ question. Garland probably assumes that we’ve seen enough of these kind of films to figure out that the answer’s inevitably yes. Instead he switches his attention to Nathan and Caleb and in doing so turns Ex Machina into a thinly veiled dig at the dehumanising effect of technology on men and their relationships with women and each other. Strip away the aura surrounding Nathan as the founder of the world-changing company (interestingly it’s the biggest search engine corporation – Google rather than Apple) and he turns into a lonely drunk incapable of empathising with anyone or anything. In his opening conversation with Caleb he cheerfully says they should just treat each other as two buddies, rather than as star struck employee and The Man – but it’s the kind of phony dictat familiar to anyone who’s been on one of those godawful corporate bonding weekends. The rest of the time he’s clearly gaming Caleb through an obsessively controlled and highly programmatic master-slave relationship. Caleb, on the other hand, is your archetypal geek loner who has clearly struggled to form any relationship with women. Tellingly when he confronts Nathan at one point he asks whether he assembled Ava based on his online porn viewing profile. He’s also watched Blade Runner one too many times as in one scene he goes through a rather gory experiment to check whether he isn’t a robot as well.

Without giving too much away, as the movie progresses it becomes increasingly clear that Ava isn’t the ground breaking next generation of artificial intelligence that Caleb, and we, are initially led to believe. Nathan’s motives are altogether more sinister as he seems to be intent on creating the misogynist geek’s ideal woman – meek, compliant, constantly available and an eternal prisoner in the ultimate designer smart house. At this point it starts to feel like American Psycho with robots – a study in corporate alpha-male control freakery gone barmy. It also reminds me of the Futurama episode I Dated a Robot

Visually the film’s muted, geometric composition echoes the overall lack of empathy between any of the characters. At least one commentator has remarked that it feels very much like a Kubrick movie. It drags in parts – there are perhaps a few too many explanatory conversations where the two programmers tell each other all about the theory behind AI, just in case they’d forgotten – but on the whole it works as a tense thriller. You know there’s only going to be three possible endings, but even so when the final scenes play out they are still gripping. Other deft touches include a completely bizarre disco scene halfway through which merely serves to underscore the self-absorbed and isolated world of the sociopathic IT guru.

I’d definitely recommend watching this back to back with The Machine. Although the earlier movie is more of a B feature Terminator clone it tackles similar ideas and has enough intelligence to bear comparison with Garland’s more considered and slow-paced film.