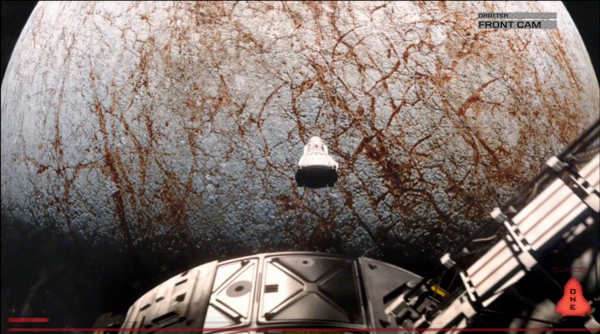 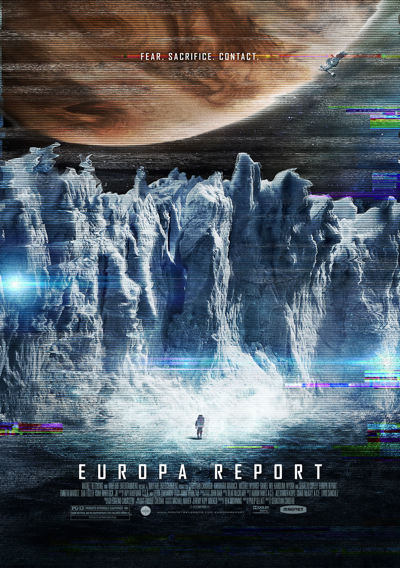 News from Space last week confirmed the existence of an ocean underneath the icy surface of Enceladus. Furthermore it seems that this immense body of water is in contact with the moon’s rocky core, allowing minerals to leach into the sea. Chemicals, water and tidal heating caused by Saturn’s gravity point to the tantalising possibility of life. The only way to find out, of course, is to drill through the ice and have a look, a plan that’s been on the cards for Jupiter’s moon Europa for many years, and which forms the background to the found-footage SF movie Europa Report.

For a while it seemed that the completely ridiculous Apollo 18, with its moon rock spiders, had pretty well put the nail in the coffin of the found-footage SF genre and the horror versions were tying themselves in increasing knots. I know modern dads sometimes hide behind the video camera to avoid engaging with their families but if I’m rescuing my daughter from a coven of witches I want one hand to hold the kid, and one hand to hold the tyre iron, not a bloody handy cam, but hey ho. Anyway just when we all thought grainy video footage had had its day as a plot device, Europa Report breathes fresh life into the conceit, combining hard realism with a pretty engaging story.

The release schedule of Europa Report was frustratingly odd. It came out on the US iTunes in 2013 as a download but wasn’t available here until this Spring, probably to coincide with the release of Gravity on DVD so it could ride on the coattails of that movie. Apart from obvious similarities to 2001, Sunshine and Gravity in its hard science approach to near-space exploration the closest ancestor is the BBC TV series Space Odyssey: A Voyage to the Planets, produced by the BBC in 2004 as a quasi-documentary tour of the universe taking in Venus, Mars, Jupiter, Saturn, a fictional comet and Pluto. It was an oddly unsatisfying two-part series that didn’t really work as science or drama, and underscored a lot of the problems facing film makers trying to create realistic space journeys that have enough drama and interest to sustain a couple of hours.

The basic problem is that in between taking off and landing space flight is deadly dull and the writers are left with very little to work on. The choices are

a) Things Go Wrong – which can be pretty exciting and spectacular in the case of Gravity or Apollo 13 where things go really wrong. For the BBC documentary and Europa Report things can’t go too wrong, because then you’ve lost the mission. So things go a bit wrong and people gather anxiously around readouts muttering things like ‘I’m seeing a voltage spike on the KU-BAND Circuit Breakers on Panel R15’, which means bugger-all to anyone. The only alternative to this is Crewman Spectacularly Cocks Up

b) Crewman Spectacularly Cocks Up – and boy did they cock up in the BBC documentary. Whoever put this lot in charge of a multi-trillion dollar spaceship needs a quiet talking to. Nearly everything went wrong and a lot of it was down to human error – i.e. dithering around in lethal radiation zones, getting too close to the asteroid so the ship nearly got atomised, staying too long on Venus/Mars/the Comet etc etc. Inevitably this triggers the Crewman Dies scenario, followed by the Guilty Crewman Mopes Around. This can trigger Crewman Goes Barmy but then you are into the realm of Apollo 18 as real astronauts just sit on bunks and sulk instead of chasing the others round the ship with a hammer or a knife and fork like Big Jim in Chaplin’s The Gold Rush.

So in Europa Report we get Crewman Spectacularly Cocks Up when Sharlto Copley gets Hydrazine all over his suit while performing a routine EVA and so has to be left to die in space, followed by Guilty Crewman Mopes Around when Michael Nyqvist’s character goes all Scandinavian and broody because he thinks it was his fault. We almost get Crewman Goes Barmy because he sees things moving around outside when they land on Europa and everyone else exchanges glances and twiddles their fingers next to their temples. Of course anyone with a fraction of a brain would be going ‘Bloody hell, where?’ but this is Seriously Real Space Stuff so instead they gather round readouts going ‘Maybe it’s a voltage spike on the KU-BAND Circuit Breakers on Panel R15’. From then on the film is just one string of disasters after another, people falling through the ice, engines going wrong, the ship falling back onto the ice, everyone else falling through the ice again until we get the final OMG scene at the very end, which to be honest was expected all along but is still impressive despite that.

To be fair, although the film, like every Lovecraft story ever written, rides well-worn tracks to the final reveal it is still an impressive and eminently watchable movie, and before Gravity came along a delightfully refreshing break from overblown action SF spectaculars like Oblivion and Pacific Rim. The cast, on the whole, act well even if their roles are a bit obvious. Sharlto Copley reprises his goofily enthusiastic Wikus from District 9, Michael Nyqvist does Gloomy Swede and Christian Camargo looks and sounds like Mr Spock as the science officer. The real star of the show is, for me, Anamaria Marinca as the pilot Rosa. The way she switches between I’m Going To Die terror and sheer, wondrous curiosity in the final few moments is very moving, flattened somewhat by Embeth Daviditz’s wholly unecessary ‘Well that really shook up our understanding of the universe, didn’t it?’ speech in which she seems to be trying to channel Margaret Thatcher’s accent.

In terms of cinematography and pacing, the film is spot on. Although ultra realistic space flight tends to consist of scrapyard vessels motionless against a black background, the special effects and imagery work beautifully to give a real sense of a journey travelling far beyond the limits of what’s decent. While the film might now be completely overshadowed by Gravity, it’s an unfair comparison as it has its own intelligent and considered pace that rewards careful watching.