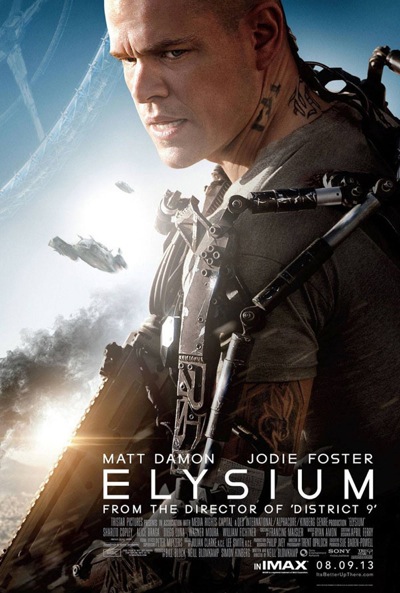 It’s a truism that, on the whole, film and TV sf lags behind the written genre by twenty to thirty years. With Elysium we’re firmly back in mid-90s Cyberpunk territory. Elite super-rich live in their Tory/Republican paradise on the orbital structure Elysium, while the proles endure short miserable lives in the squalor of earth-bound shanty towns, forbidden from going anywhere near the space habitat. Throw in rebel hackers, enhanced cyborg mercenaries and an array of weaponry designed to blow people to bits in imaginatively gory ways and the end result is a tightly-paced, gritty political thriller that seems centred around the thorny issue of public health care. While the elite cure their cancers by lying on a super medical sun bed for thirty seconds (and getting a couple of cool tats thrown in for good measure), for the poor down here on Earth it’s a race between waiting lists in squalid under-resourced public hospitals and inevitable death or disablement. Having given apartheid the once over in District 9, Neill Blomkamp turns his attention to Obamacare.

Matt Damon plays Max Da Costa, an ex car-thief on parole in a factory making the police robots who are programmed to cheerfully duff up any proles who step out of line (one of them breaks his arm at the start of the film for being a bit lippy). A major health and safety incident on the assembly line leaves him with five days to live and so he decides to try and get to Elysium to be cured. He falls in with a bunch of hackers who fly dangerous refugee runs to the space station and they agree to help him if he steals the data carried in one of the elite’s heads (William Fichtner’s wonderfully sneery John Carlyle), which will give them flight access codes for the space structure. Damon ends up with more than just a set of passwords and the rest of the film is a race between him getting himself (along with ex-girlfriend and her daughter suffering from leukaemia) to Elysium and a squad of shadow assassins who want to pull his head off and hand it over to the villain so she can use the information inside to pursue her nefarious schemes. 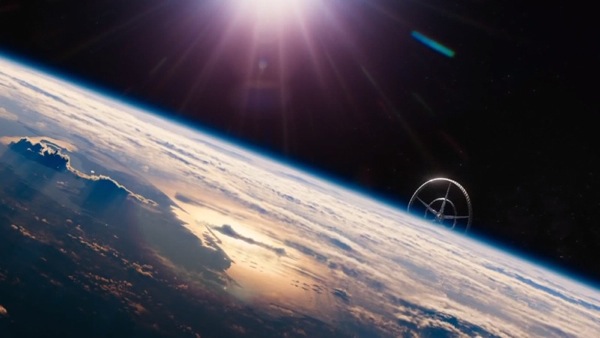 Space Habitat Elysium, home of the .01%

Jodie Foster does an interesting turn as Elysium’s uber-Fascist Secretary of Defence, cheerfully destroying shuttles full of crippled children making a desperate bid for the space station’s medical facilities. Her performance is convincing, if curiously mannered, and I haven’t a clue what accent she thinks she’s doing. At some points of the film it almost seems that her lips are out of sync with the noises coming out of her mouth. She sounds more like her old self when speaking in French (Jodie Foster is fluent). They speak a lot of French on Elysium,  clearly a sign of utter evil. Her exit from the film is anti-climactic, as though having built up such a magnificent villain Blomkamp didn’t really know what to do with her, other than have her order nutters about and stare at computer screens chewing her lip as her plans for world domination unravel. 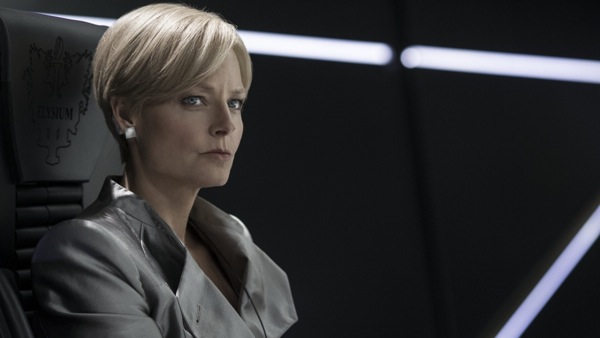 Elysium owes a lot to the 1995 Cyberpunk film Johnny Mnemonic, scripted by William Gibson from his short story of the same name, and staring Keanu Reeves as a data courier who stores information in his head. In both cases cyber-enhanced heroes have data to change the world embedded in their minds (though poor Keanu had to use a memory doubler to increase his brain capacity to a whopping 160 GB, losing most of his childhood memories as a result and suffering a nose bleed in the process). They are then pursued by a demented corporate mercenary disguised as a monk. That turned into one of the film’s OMG moments as mild-mannered clerk Wikus (Sharlto Copley) from District 9 turns up with bits of an Airfix kit glued to his face and a Rasputin beard as deranged cyber warrior Kruger. He’s completely bonkers and magnificent to watch, uttering a stream of surreal matey banter in a sarcastic South African accent. Johnny Mnemonic just went daft at the end, Elysium finishes with a climactic chase and battle through the corridors of the habitat. There is a slight sense of ‘ho hum here we go’ as super-enhanced warriors lay into each other in a riot of that sepia-tinted blurry camera-work everyone uses these days, but the fights are livened up by Sharlto Copley’s irreverent Jo’burg bar quips. 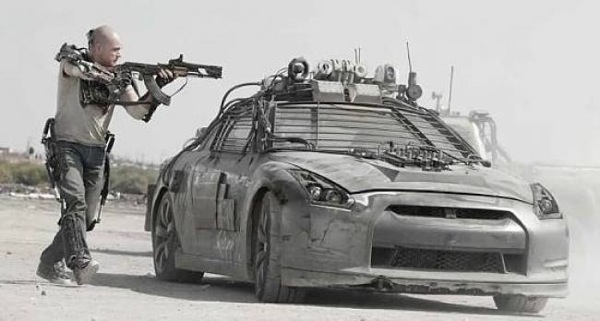 And a bit of a Mad Max tribute for good measure

The visual imagery is fantastic, a lot of it reprising the cool newsreel style of District 9 as battered shuttles coast over mile after mile of dusty shanty town. Elysium itself is designed by the famous futurist artist Syd Mead (who worked on, among other things, Blade Runner), very much in the style of 1970s and 80s architectural illustrations – cold and ascetic with a retro yuppie feel. 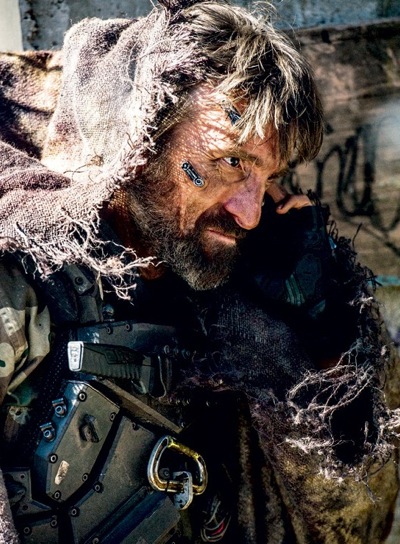 Back from chasing ‘Feckin Prons’, Sharlto Copley does Rasputin in Technical Lego

All in all it’s an entertaining movie. Inevitably comparisons are being made between it and District 9. As is often the case when a quirky new director is given loads of money to go mainstream the results can be disappointing as the barmy tongue-in-cheek anarchy of District 9 makes way for a more po-faced and conventional Matt Damon action thriller. Even so the grungy feel of poverty-ridden and overcrowded Earth is fantastically atmospheric, and most of the actors rise above their typecast roles.

There are some wonderful little touches scattered through the movie – Matt Damon’s robot parole officer with its face covered in graffiti by disgruntled clients, William Fichtner’s factory boss telling his foreman to cover his mouth when he speaks so he doesn’t have to smell his breath, and mad Sharlto Copley singing a nursery rhyme in Afrikaans. Republicans have denounced the film as socialist (like they did with Wall-E). What better recommendation do you need?