The Symbolist and Decadent movement in European art has always been overlooked. It stands between the twin monoliths of Impressionism and Cubism, and is overshadowed by both. It’s also tainted by association with late 19th century Narrative Art, where the story of a painting was more important than the style or quality. A lot of it was dire. Most of Félicien Rops’ stuff should have been consigned to the bin. Wickedly transgressive subject matter is no substitute for an inability to draw.

The Symbolists tried to capture the essence of dreams, but, unlike the Surrealists, they weren’t so interested in Freud. For them, a dream image wasn’t a puzzle which, when unlocked, pointed at sexual repression. It was a gateway to a mysterious other realm that existed beyond the tedium of bourgeois life. Their pictures were designed to evoke moods, not to be interpreted. A good example of this is the fact that Arnold Böcklin’s famous painting below originally had no title because the artist wanted his audience to dream over it. We know it as the Isle of the Dead, but this is only because of the art dealer Fritz Gurlitt, who needed something to stick in the catalogue.

This links a lot of Symbolist painters with writers like H. P. Lovecraft and Lord Dunsany. Lovecraft was openly dismissive of Freud’s “puerile symbolism” (Beyond the Wall of Sleep – 1919). For him dreaming took you to another existence, far richer, evocative and interesting than that of a sickly recluse in Providence, Rhode Island. So in that sense the Symbolists are the early fantasy illustrators of the 20th century, influencing, and occasionally influenced by, writers like Dunsany, W. B. Yeats and others. Any collection of Symbolist art yields some fantastic, but largely forgotten, works. They are an infinity away from the soft-core Barbarian in Bondage genre of most modern fantasy paintings. Here’s a few of my favourites. 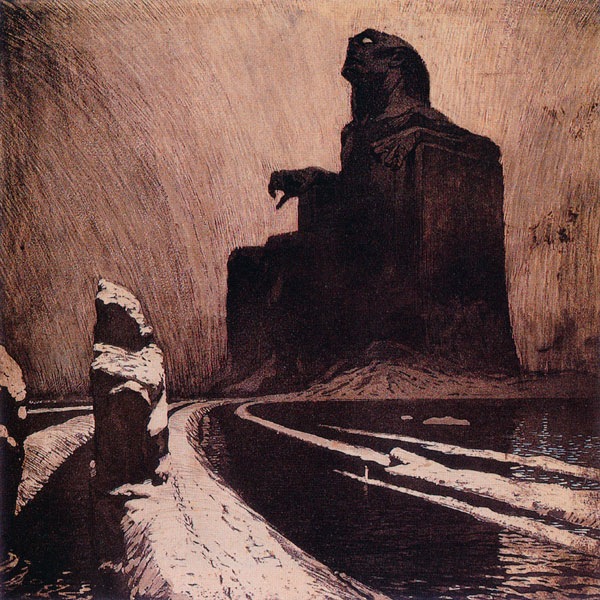 Frantisek Kupka’s Resistance, or The Black Idol (1903). Very Lovecraftian, this one and definitely one for the nightmares. The figure is based on the Colossi of Memnon, but given a terrifying twist. It’s hard to tell the scale, it looks as big as a mountain to me. This was the inspiration for the castle in Coppola’s film Dracula (1992)

Fernand Khnopff’s I Lock the Door Upon Myself (1891). This is a perfect example of how the Symbolists could take the portrait of a young woman and turn it into something incredibly creepy and mysterious. The pale gaze of the woman (is she blind?), the odd composition (no perspective, blocks of colour all over the place) and the picture in the top right (a painting or a window?) showing a black shrouded figure in a lonely street, all conspire to create a painting that is very disturbing. I’ve met people who simply can’t look at this one. I think it’s great and would put a print in the lounge if it didn’t frighten the cat. 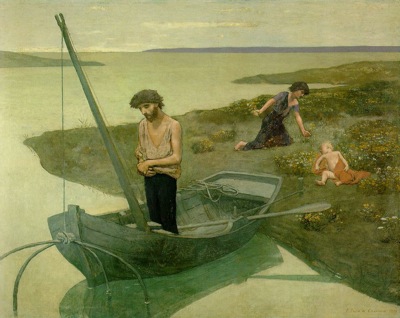 Pierre Puvis de Chavannes’ The Poor Fisherman (1881). OK, it’s a fisherman standing in a boat with his wife and baby on the shore. But take another look. The set up is completely weird. What is he hoping to catch two-foot away from the bank of an empty lake? Why is his family there? Is the child alive or dead? The wife is gathering plants (for a wreath or to eat?). Like a lot of Symbolist paintings the landscape is completely empty apart from a one or two figures doing inexplicable things. It also deliberately shouts ‘This is a symbol of something else’ but then resolutely fails to give you a clue as to what it’s all about. 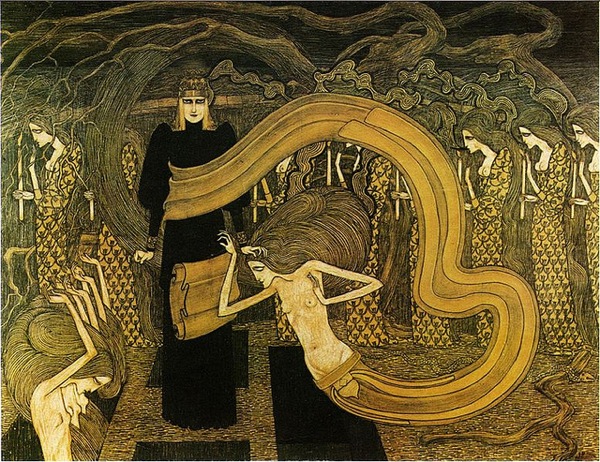 Jan Toorop’s Fatality (1893). Jan Toorop was an Indonesian painter who lived and worked in the Netherlands. His paintings were strongly influenced by Javanese art. Many of his works show sinister, fantastic scenes haunted by images of death. This is one example, and would make a perfect illustration to either Dunsany or Moorcock.

This little selection barely scratches the surface. There are some great books on Symbolism available. If you can get hold of the Taschen book it has a good selection of largely unknown works.