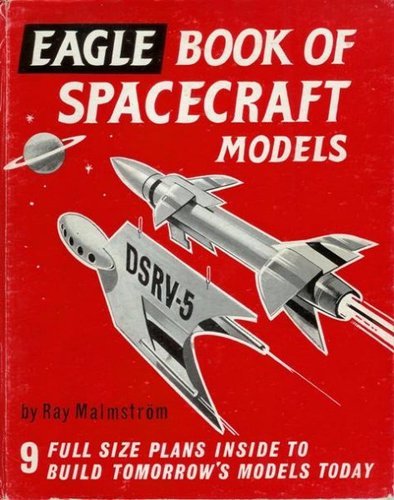 By the time I was old enough to read the famous British comic Eagle it had folded, so I missed Dan Dare, Police Constable 49 and the inner workings of various planes, trains and automobiles. Eagle was founded in 1950 by a vicar who wanted to get the morals of Anglican muscular Christianity over to a generation of boys corrupted by American horror comics (girls were too busy watching John run/dive/chase Spot at this period in history to read comics). It was hugely successful and light years ahead of any rivals in terms of its production quality and content.

The Eagle Book of Spacecraft Models was published in 1960, the year before I was born, and the year before Yuri Gagarin became the first official man in space. It’s got 9 full scale plans inside and instructions on how to build flying miniatures of Moon Rockets, Martian Flying Saucers and Space Patrol Craft. One model is for looking at only – the Interplanetary Spaceliner, which “is for display in your room or den.”

All the spaceships are designed to be made with balsa wood, tin foil, asbestos sheets (!) and Jetex motors, which were jet engines in miniature used in model aircraft. The book warns readers not to use home-made rockets or jet engines as they might blow up, taking the inventor and his den with them. Airfix plastic kits were yet to dominate English boyhood so models at this time were all built from scratch. In 1960 you could get the construction materials at your local Boots the Chemists. Nowadays they are banned in 75 countries and usually handled by guys in giant white overalls, helmets and waldos.

The book belongs to another age, when falling out of trees, setting your hand on fire to see what it felt like and careening down hills towards a busy junction in a home-made go-kart with no brakes were part and parcel of growing up (for those of us who made it). It combines the kind of hands-on slide-rule engineering that pipe-smoking back-room men in cardigans used to defeat Hitler, with a wildly naive and optimistic vision of the future. The lad below is holding a model of a Car of Tomorrow. I had a school cap like his until Stinky Foster poured hydrochloric acid on it in Chemistry class and the peak fell off. 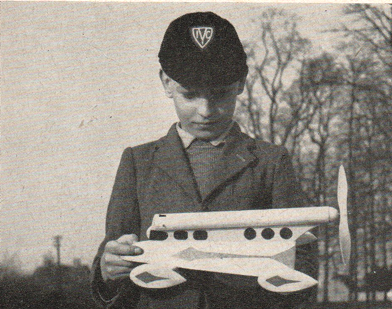 Whatever shape the cars and coaches of the Space Age take, one thing is certain – they will be very unlike the vehicles on the roads of today. A combination of aircraft and surface vehicle seems likely, probably jet-propelled and capable of very high speeds.

By the Space Age they meant round about 1970 onwards. I am still waiting for my flying car so I can stand outside my flying-saucer shaped house with one hand in my cardigan pocket and point at it proudly with the stem of my pipe.

Here’s a picture of the back cover, showing all the models and their costs. To build a Moon Rocket will set you back by 4 shillings and 3 pence, that’s 21.5p in New Money, which is about the same price as a third of a modern Mars Bar. 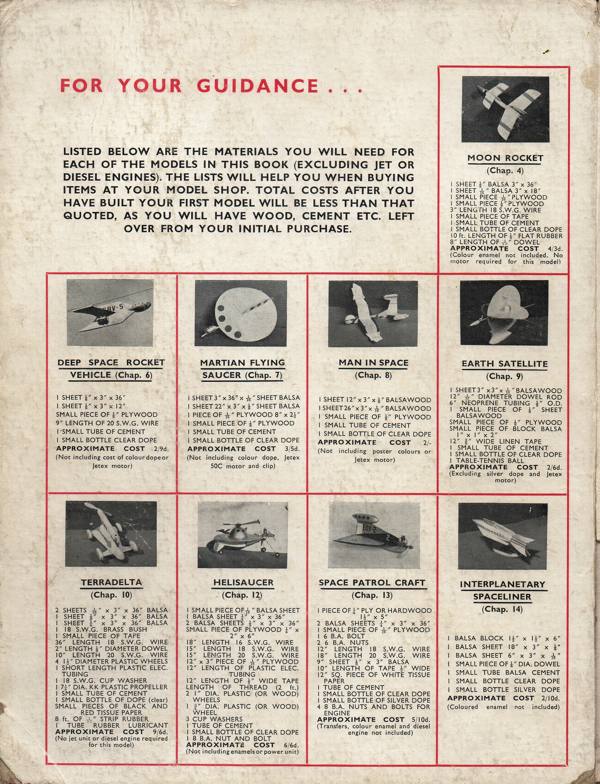