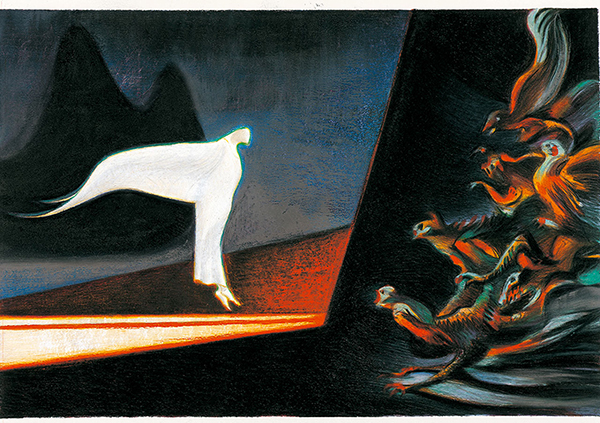 An angel opens the way to the lower regions of Hell. Lorenzo Mattotti.

Funnily enough it was Larry Niven and Jerry Pournelle who turned me on to Dante. Their decidedly odd libertarian take on the original, Inferno, came out in 1976 and had the Science Fiction author Allen Carpentier dying after falling out of window (Asimov’s fault) and being led through Dante’s hell by Benito Mussolini. I started off with Dorothy Sayers’ verse translation and then, at university, came across John D Sinclair’s infinitely preferable parallel prose translation and was totally hooked. I even did my own fannish version for Yorcon, the 1979 Easter Science Fiction Convention in Leeds, under the title ‘Dante Alighier’s Immense Randy Ginger Tom Cat’ (don’t ask). 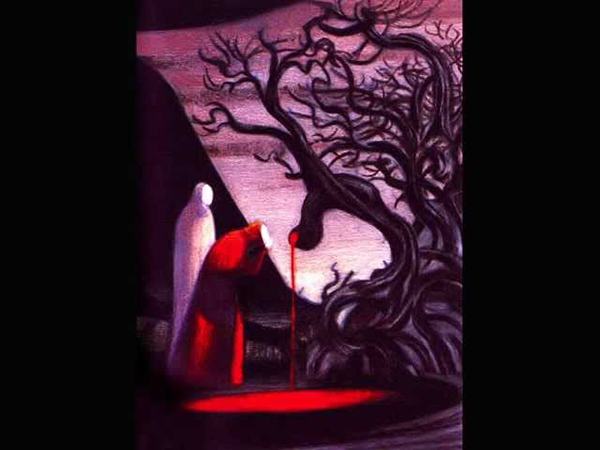 I’ve been looking for a decent luxury illustrated Italian edition for a while now and this summer finally found one in a bookshop in Siena. In 1999 the Nuages Gallery in Milan commissioned three artists to illustrate the Divine Comedy – the Italian comic artist  Lorenzo Mattotti did Inferno, the American graphic designer Milton Glaser did Purgatorio and Moebius (aka Jean Giraud) did Paradiso. The results are stunning – three very different takes on Dante’s poem ranging from dark Expressionism through Pop Art meets Chagall to the wonderfully surreal fantasy character design of Moebius. 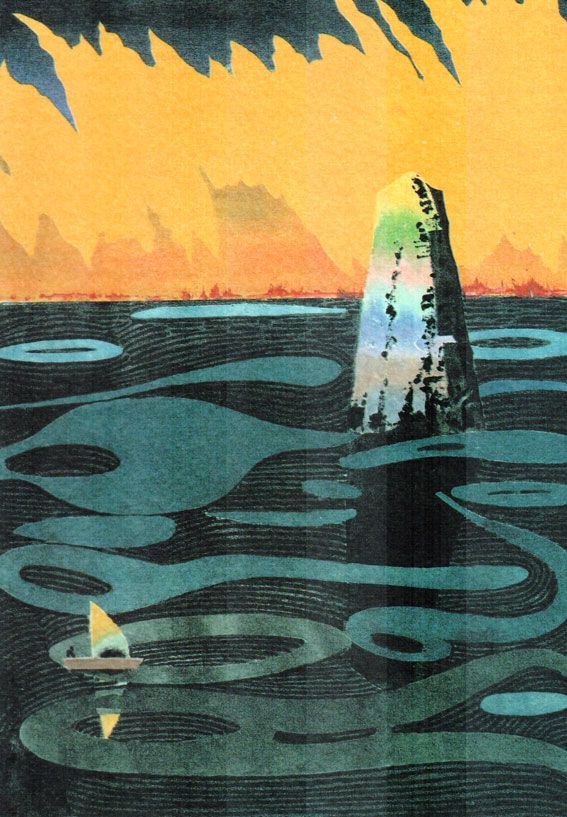 Tackling Dante very slowly in Italian has been a revelation. I’d assumed that, like his near contemporary Chaucer, the language would be very archaic. What I didn’t realise was that Dante is largely responsible for nailing modern Italian down. By writing such a stunning and popular epic in his Tuscan dialect he effectively established it as the basis for the standard version of the language. So it’s as close to present-day Italian as Shakespeare’s English is to ours (another writer who almost single handedly transformed a nation’s speech). 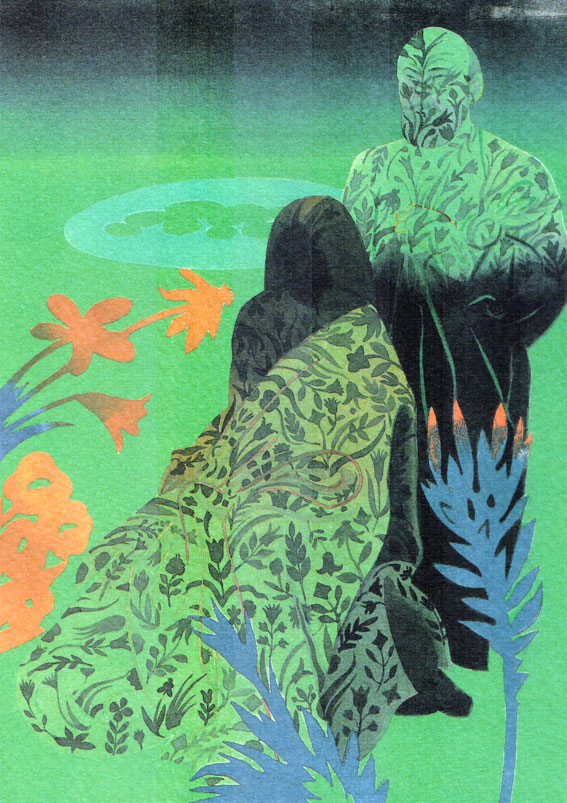 Dante’s Divine Comedy starts with the poet lost in a dark wood, unable to find his way out and menaced by wild beasts. He meets the ghost of the Roman poet Virgil who tells him that the spirit of Beatrice (a young girl who Dante idolised and who, after her death at the age of 24, he turned into his muse) has sent him to guide Dante through Hell, then Purgatory and finally to Paradise, each stage covered in its own volume. Dante, a bitter exile by this time, spends a lot of his journey bumping into people he knew in life and having conversations along the lines of ‘fancy meeting you here’. Inevitably Inferno, with its intricate punishments, monsters, devils and lurid confessions, is the most finely realised and gripping part of the Comedy. Purgatorio manages to retain some of the drama and wonderful descriptions but never quite reaches the same level. Paradiso mainly consists of Dante standing on clouds while angels and spirits tell him improving stuff. 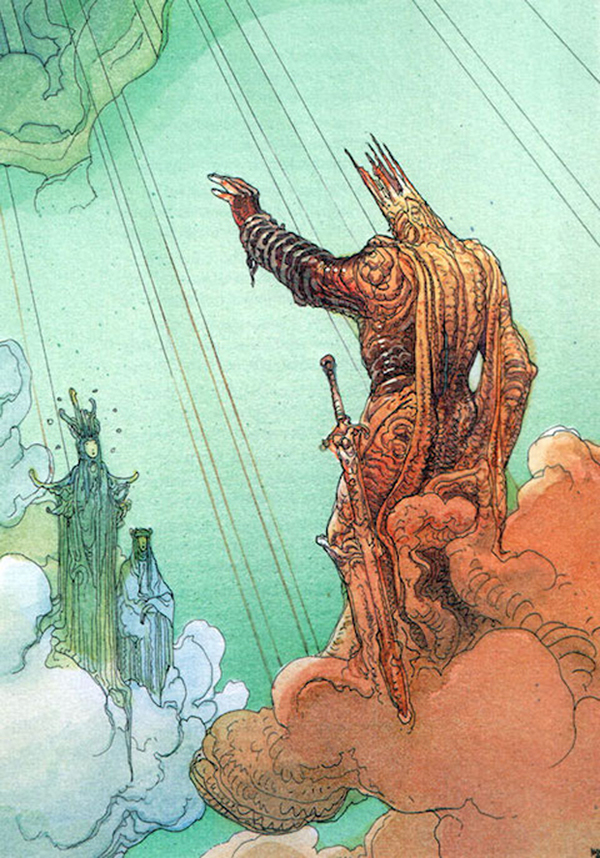 The ghost of Charles Martel. Moebius.

Anyone trying to illustrate Dante has to work in the shadow of Gustave Doré, whose dark romantic landscapes filled with tortured souls and brooding monsters have become the de facto reference work for the poem. The 1911 silent film Dante’s Inferno, perhaps the only decent attempt at a movie version, is clearly based on Doré. Of the three artists illustrating the deluxe version, Moebius comes closest in recreating the earlier artist’s work. I guess this is partly because of the very static, set-piece nature of the scenes in Paradiso, but also it’s fascinating seeing these powerful re-imaginings of the imagery in classic Moebius style. The picture showing Dante meeting Charles Martel looks like Dore does Moorcock. 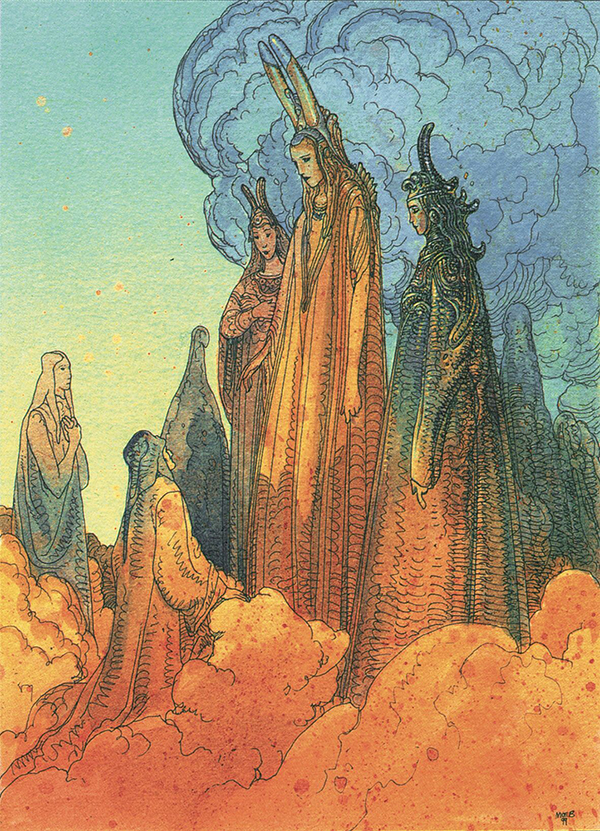 Dividing the three books between different artists works brilliantly. Mattotti’s Inferno is brooding, expressionist and far more sinister and disturbing than Doré’s often overly realistic pictures. Purgatorio is more decorative – a mix of earth-tone abstracts and understated symbolism. Paradiso is a grand operatic finale crying out to be animated. The whole set is begging to be picked up by, say, the Folio society, rendered into hardback and made more widely accessible with the addition of Sinclair’s translation.

You can order the books from the Italian Amazon, mine came in about five days:

← The Thrilling Adventures of Lovelace and Babbage, and Logicomix
Why Terry Pratchett is not Great Literature →