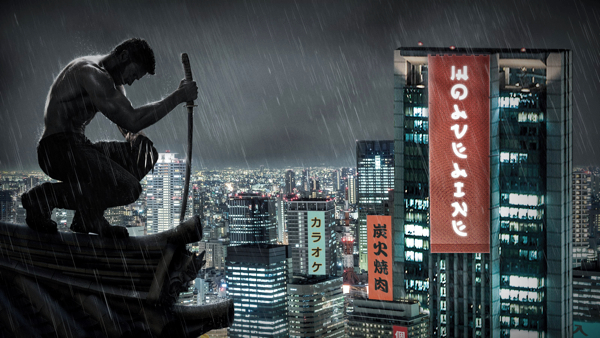 I downloaded The Wolverine from iTunes a couple of weeks ago. All good fun, even if it did go through the motions a bit, and Hugh Jackman is always watchable in the title role. It was set in Japan, at least the kind of Japan that only exists in Hollywood execs’ heads, and as such felt like a trip back to the early 1990s when I was living in Hokkaido, the northernmost island. At that time relations between Japan and the US weren’t great due to a huge trade imbalance, pumped up by the West as evidence that the Sons of Nippon were set to try and take over the world again, this time financially. Symptomatic of that era’s zietgeist were Karel von Wolferen’s ridiculously alarmist book The Enigma of Japanese Power and the film Rising Sun, based on Michael Crichton’s novel of the same name and starring Sean Connery. My Japanese friends were getting a bit sniffy about what they saw as the relentless Japanese bashing from the US and we all dutifully trooped off to the cinema to see the movie so they could get miffed bit more and we could attempt to mollify them by pointing out that not all Gaijin thought them avaricious wankers. It was a false alarm. Ten minutes in so-called Japanese expert Sean Connery opened his mouth, supposed ‘perfect Japanese’ came out, and the entire cinema dissolved into tears of laughter. From then on the film was treated as a comedy and Japanese audiences stopped taking US tantrums seriously, especially when shortly afterwards George Bush threw up in the Japanese Prime Minister’s lap halfway through trying to persuade him to buy American.

In the Science Fiction world attitudes to Japan came almost exclusively from Cyberpunk and novels like William Gibson’s Neuromancer. In these tales futuristic Asian cartels populated by corporate samurai slugged it out in cyberspace and the streets of future Chiba, a mega sprawl covering all of the eastern coast. Boosted Yakuza, Virtual Geisha and Otaku Hackers rubbed shoulders in the rainy streets of Ridley Scott’s Blade Runner and those images have stuck, recycled in movies, anime and computer games and egged on by Japanese who quite fancy themselves as Cyber Ninja. The problem is that this Japan bears about as much relationship to reality as Downton Abbey does to modern urban Britain. Having lived for ten years in the country, and worked with Japanese companies and universities for over two decades, I find it particularly hard not to giggle my way through The Wolverine and movies like it, especially when the following cliches are trotted out, yet again:

Japanese Businessmen are all Corporate Samurai

Ieyasu Tokugawa unified Japan in 1600 and exerted his power over the other feudal lords by making them very poor. Over the next three hundred years the samurai class turned into underpaid administrators, clerks and bureaucrats. Think about that for a second – they became civil servants, like the people who send out demands for tax, give you permission to build an extension to your garage or ban hanging baskets in town centres because they might fall on shoppers’ heads. In 1876 samurai were even forbidden to carry swords, which shows you how much power they had in early modern Japan. The idea that Tokyo salarymen carry an unbroken tradition of feudal loyalty from the medieval period is as ridiculous as saying I still hold to the chivalric ideals of my ancestor Sir Reginald De Colwic (c. 1157). Japanese corporate bosses do not, on the whole, keep entire suits of armour in their boardrooms, any more than I have a chain mail vest in my sock drawer, or a two-handed bastard sword in the cupboard. Japanese salarymen are overworked and harassed middle-class blokes with deadlines, car loans and grumpy managers, not über warriors ready to charge around kicking paper screens down in spectacular sword melees. Which brings me on to…

A Japanese Sword is the Mystical Soul of its Owner, forged by Master Craftsmen.

The first problem with Japanese swords is that they are long, very sharp and you need quite a bit of space to wield one. Unlike Western fencing, which largely consists of short jabbing movements with a pointed blade, Japanese swordplay involves waving the thing around with two hands and leaping all over the place while yelling the name of the part of the body you’re about to stick it in. Urban Japan is very cramped, and in many homes you can touch both walls by standing in the middle of the room with your arms stretched out.  Unless you are in a dojo or a big field you are likely to end up with the weapon stuck in the ceiling, walls or floor, or half a dozen people who got in the way. Japanese swords are nice, if you are into that kind of thing, but not the major core of Japanese culture films like Kill Bill and The Wolverine would have us believe. The Tokyo Sword Museum is the size of a big garage, but once you’ve looked at your twentieth bit of curved metal with a wavy pattern on it gets a bit dull, and I only ever saw the occasionally bored looking school party when I visited. The Yakuza sometimes break out swords because they are more frightening than a gun, but even they admit that they are a bugger to use in the cramped corridors of a rival gang’s den (in fact Yakuza offices are designed with very narrow passageways precisely to make it hard for topless tattooed Ken Takakura wannabees to get beyond the lift without being shot). Japanese swords can safely be filed under the ‘more romantic nonsense for gullible foreigners’ sign.

Get out the Ninja

If the films are anything to go by if you have a problem with a rival dynasty or another corporation has undercut you all you need to do is Dial-a-Ninja and hundreds of black clad shadow warriors will pour over the rooftops hurling interesting home made bombs around like a violent version of Cirque Du Soleil. I never once came across anything to do with ninja in my twenty years dealing with Japan (Aha, you say, that’s because they melt into the shadows like the cunningly invisible assassins they are). The historical problem with ninja is that they were only good for one mission, at the end of which they killed themselves to protect the identity of their employer. The most famous ninja hid in a toilet all day so he could stab a lord up the bum, hardly exciting and romantic. It was never a particularly glamorous calling, despite the cool gear, and recruitment was always a problem. Yet Gaijin love ninja for some reason, and Japan is happy to feed this strange obsession.

All Japanese are Martial Arts Experts.

I studied Aikido at the world centre for Aikido in Tokyo for a year and every class consisted of 50% French (don’t ask me why), 20% other foreigners (including that bastard Miguel from Barcelona who nearly twisted my arm off) and one or two Japanese blokes. Martial arts are hard and you have to train for years, hence of little interest to disaffected, idle Japanese youth of today. Furthermore, in one of the most peaceful societies in the world there’s not a lot of call for close combat skills. The biggest hobby for my Japanese friends seems to be playing musical instruments and they are brilliant with the flute, violin etc. Martial arts are popular with Gaijin who want to be more Japanese than the Japanese. To the average Japanese twenty-something, martial arts have all the appeal of Morris Dancing over here. Admittedly the sight of a weirdly sexy Japanese model in stripy stockings and a black miniskirt whaling the crap out of ninja (who else?) makes for good viewing but now we really are in the fairy-tale realm of Sailor Moon.

Japan is ultra hi-tech society where the future is now!

OK – the Japanese love gadgets and are massive smartphone users, but that’s about it. Go into any Japanese office and you’ll be hit by the mountains of paper forms surrounding the computers. PC use came to the country later than in the West, simply because it was only from the late 1980s that computers were powerful enough to handle the thousands of Chinese characters needed for basic word processing. The vast majority of school classrooms use chalk and blackboard, and are heated by kerosene stoves. People sign the countless documents that cross their path with the same wooden seals used since medieval times. The most impressive sight is when you take money out of a bank or visit a post office. The teller works out the sum on a calculator, and then uses a wooden abacus to double check the machine got it right. Futuristic hi-tech exists in isolated pockets, and usually at the level of personal use, but as a whole Japan is a surprisingly lo-tech country.

Yakuza are brainless thugs. They like to think of themselves as champions of the commoners vs. corrupt politicians and much was made of the fact they were first on the street handing out food in the wake of the 1995 Kobe earthquake. In reality they rely on extortion, prostitution and peddling Class B drugs. They operate out of Estate Agents, have their own business cards and publish magazines containing poems about what a hard life they have. The police tolerate them because organised villainy is preferable to anarchy, but the rest of Japan is increasingly less accommodating and the Yakuza are on the retreat as local residents associations go on the attack, and they fall apart from their own in-feuding. Yes, the Yakuza’s biggest enemy is the middle-aged Japanese woman, so fearsome they even have a comic series dedicated to them. Yakuza rarely go international because, like most Japanese, they struggle with foreign languages and find themselves up against criminals from far less comfortable and accommodating societies like Russia and China who happily have them for breakfast. Finally re. Yakuza with fingers missing. They cut their finger ends off when they make a mistake, so the gangsters with lopped digits are the ones who are, quite frankly, a bit useless.