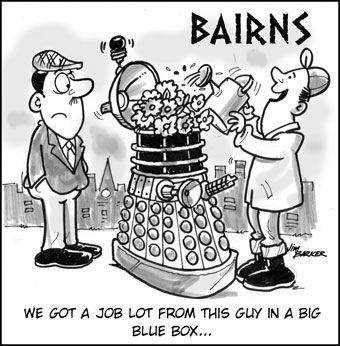 I wanted to give this blog post over to a friend of mine who is a brilliant independent cartoonist; Jim Barker of Jim Barker Cartoons and Graphics. Having lived in Japan for ten years, I can entirely sympathise with this. For the Japanese, manga are a narrative art form to be taken as seriously as any other form of art. They are used not only for entertainment, but to educate as well. Similarly in France, Bande dessinée have reached astonishing levels of sophistication. Unfortunately in the UK, cultural snobbery has meant that the real potential of cartoons and comics as an art form and a medium for expression has yet to be fully realised. For those readers not familiar with the difference between UK comic traditions and those elsewhere I’ve added three examples from France, the UK and Japan so you can see the difference.

I blame The Beano.

In other parts of the world – Europe, America, Japan – cartoons and comic strips are regarded as a legitimate and serious art form. In the UK, however, thanks to generations of cheaply produced comics, they are still seen as simply ‘kids stuff’. It’s amazing how sniffy people can be about cartoons. I’ll meet a marketing’n’PR person at a networking event and the minute I say I draw cartoons, you can see the eyes glaze over, barriers going up and they’re looking over my shoulder searching for the next meeja person to talk to.

Happily there ARE people who realize how useful cartoons and humour can be as communications tools. No one can deny that in presentations, pictures are much more efficient at telling a story than wodges and wodges of words. Equally, using humor, the points are easier to make, the message is better understood, and the audience will pay closer attention to details or points you want to get across.

But primarily the purpose of a cartoon to make people smile. And that’s something we all need these days. It is a fact that laughter releases endorphins that make people feel relaxed and overall happy. Visuals… humour… visual humour… not rocket science, is it?

Cartoon characters have been used for years to personify companies. Tony the Tiger, for example. Or the Tetley Tea Folk. The BBC used a cartoon animation to publicise their Olympic coverage. And there’s hardly a football team in the UK that doesn’t have their own cartoon mascot.

Cartoons are very effective in Health and Safety matters where they can easily depict subject matter impossible to do using other methods. I once had to draw a poster about diarrhoea and swimming pools which would have been very unpleasant using photographs. Or the brochure which featured several STDs as animated characters. Or the poster which showed the consequences of putting a hand too near a band saw…

They are also very useful in training – showing the consequences of following/not following a procedure. Or dealing with sales and Customer relations. Or simply as a way of motivating a sales team.

Having been in the graphics and illustration business for … well, more years than I care to think about… I firmly believe that cartoons – whether it’s a single illustration to brighten up a newsletter, a presentation caricature as gift for a client or member of staff… or a full scale corporate strategy involving mascots, merchandising and promotional material – are a major weapon in anyone’s marketing, promotions and communications arsenal.

All I have to do now is convince everyone else.