Bugs of the Empire 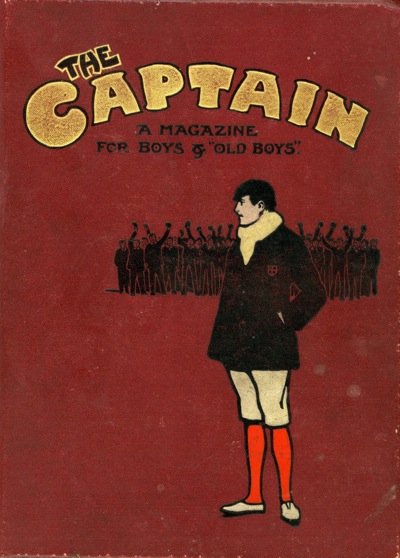 A little while ago I wrote about the Eagle Comic in the early 1960s. The Captain was a similar magazine from the beginning of the twentieth century. The upsurge in adventure books for boys in the late Victorian and Edwardian eras paved the way for the first periodicals aimed at the Empire builders of tomorrow. The Captain‘s strap line is A Magazine for Boys and Old Boys, though judging from the letters pages quite a few girls read it as well. The content is as you would expect, ripping tales of derring do in an Empire populated by plucky young Englishmen and lots of dodgy foreigners. The latter fall into two camps, simple and treacherous if they come from the less developed colonies, or clever, sinister and fiendishly treacherous if they come from civilisations that matched Europe’s (i.e., China).

The Captain, therefore, has its fair share of atrociously racist imperial tales, mingled with stories of various chaps’ tribulations at their new school. Interspersed with these are the regular features and the letters page, all of which give a fascinating insight into the world of boys (and girls) in the Victorian and Edwardian age. I’ve got the bound edition for 1907, presented to a George Henshaw by the Headmaster for “Regularity and Progress”. Inside there is the Naturalist’s Corner, the Cycling Corner  and answers to readers’ correspondence by the editor. All the features sport photographs of the columnists. They all have enormous moustaches, high wing collars and constipated expressions. This is ‘getting down with the kids’ circa 1907. 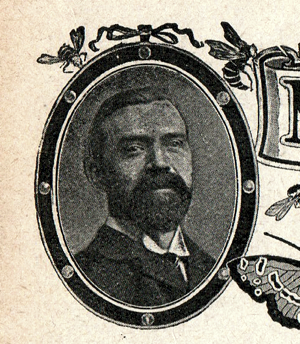 Edward Step, F.L.S. runs the Naturalist’s Corner. This largely consisted of readers sending him samples through the post for him to examine, or asking him to diagnose their pets’ ailments. His responses get increasingly tetchy as a steady procession of bugs, dead pets and exotic turds arrive on his doorstep for his analysis. One typical example reads thus:

G.A.P. (Windsor) has a green parrot his pater brought from India about eighteen years ago. It has always been a remarkably healthy bird, until quite recently , “when he gave a scream and fell from his perch.” … I do not think this condition has any relation to the use of a new kind of bird-sand, as G. A. P. suggests might be the case ; on the contrary, the symptoms appear to be unmistakably those of an apoplectic fit… All I can advise is to keep the bird quiet, and free from excitement and stimulating food.

“Bee, Wasp or Fly?” is the query propounded by ‘Jones’ (Blackheath) who sends me an insect unpleasantly squashed on a piece of paper, and asks for its name… Further investigation into its identity I must decline to make, because if readers are so thoughtless as to send specimens in a repulsive condition, it is evident they cannot seriously require the information asked for.

By July 1907 he is clearly losing the plot. He has a new photo in which his beard looks decidedly unkempt and his eyes have a mad, desperate gleam about them. This is probably why:

In spite of my repeated disclaimer, A. M. T. (Mill Hill) sends me yet another dead canary and invites me to state why it died. All things die even pets, and so far as one can base an opinion upon an external examination, I should say the present case is one of old age. But these dead pets should be handed over to the family doctor, who, by examination of the internal organs, might be able to speak with certainty.

While Edward Step was disappearing under a mountain of dead pets and repulsive specimens, the editor was replying to the readers’ more general questions. At this time, most magazines would respond directly to letters sent in, but to save time and space wouldn’t print the original enquiries. The result is a series of comments and advice to questions we can only guess at. The mind boggles as to what was going on in the heads of some of the correspondents. Some queries were as expected:

“Railway Notes” wants me to discuss, in an editorial article, the question of boys meeting girls. Boys should not meet girls without the sanction of parents on both sides and even then the girl should be properly chaperoned.

Some letters hint at a darker side to Edwardian boyhood:

J Robertson – I have been asked many things, but I never have I been asked how a guillotine is made. I have only seen one, and that was at Madame Tussaud’s. Next time you come to London, go there and examine the ghastly thing. Mr. John Tussaud, the sculptor of the exhibition, is a kind man, and possibly would give you the information you require if you wrote to him nicely.

T.M. Yes you have sinned, and that grievously, but look into your heart and pray to our Lord for forgiveness. In the meantime, a clean mouth and a clean mind is always the best advice for a growing fellow like yourself. There is a great shortage of good and willing men in Australia. I suggest you write to the Foreign Office for more information.

The overwhelming tone of The Captain is of a bunch of well-intentioned men desperately trying to steer the nation’s youth  down the right path, speaking to the readers with an odd mixture of school-masterly admonition and embarrassing chumminess. Their resolute ‘Come on chaps!’ call to decency and right-thinking is frequently combined with a sense of confusion and bewilderment when their readers don’t always respond as expected. It’s a bit like a Latin master trying to persuade his class of wayward 1907 pupils that translating Plutarch really is jolly fun, if only they would sit down, pay attention and stop thinking about petticoats. I do feel sorry for Edward Step, though I’m sure his Edwardian sense of moral purpose and dedication to the Empire kept him going.