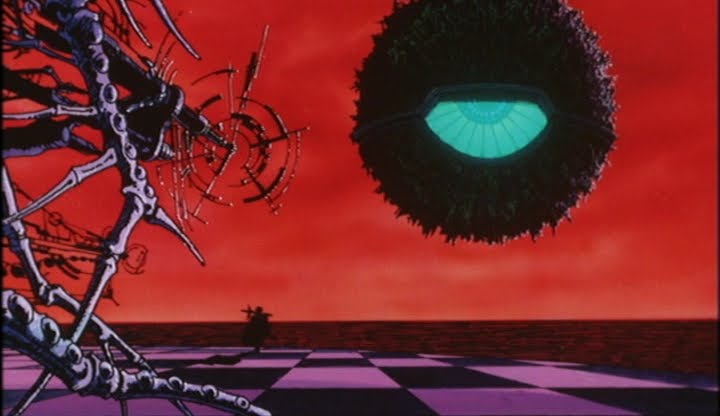 The first batch of Japanese anime to appear in video shops in the UK were resolutely aimed at the disturbed 13 year old boy market. The choice was limited to giant robots belting each other or deeply unpleasant pornography involving school girls being raped by multi-tentacled demons. Not surprisingly those of us uninterested in badly drawn porn were not impressed and anime got the reputation of being solely for the trainee pervert. Living in Japan was an eye-opener. When I moved there in 1988 I discovered a whole range of beautiful, intelligent and sophisticated cartoons coming out of Tokyo’s studios that never made it outside the country. That year saw the release of Otomo’s Akira and Miyazaki Hayao’s Tonari no Totoro (My neighbour Totoro). These eventually went on to become international classics when people began to realise there was more to this genre than giant demonic willies. 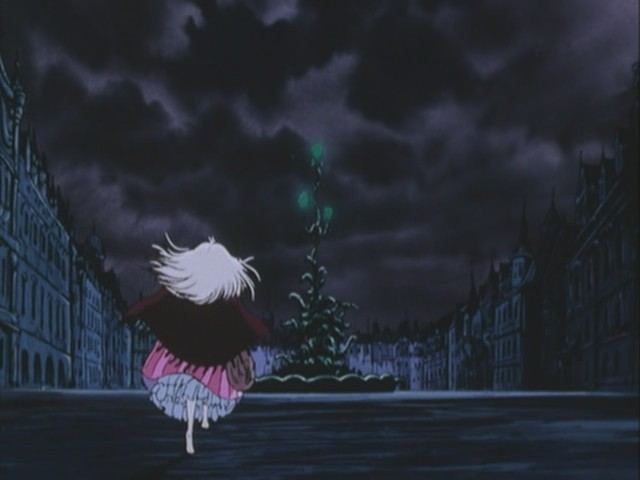 The girl in the empty city

The film that sticks in my mind most of all is Tenshi no Tamago (Angel’s Egg), by Yoshitaka Amano. It’s rarely seen outside Japan, probably because it is so completely bonkers most western audiences would have difficulty coping. I’ve already mentioned Yoshitaka Amano as one of the very few artists who’s managed to do justice to the decadent worlds of Michael Moorcock’s fantasies. He also collaborated with Neil Gaiman on Sandman: the Dream Hunters, which won the Bram Stoker award in 2000.

Tenshi no Tamago is beautifully drawn, dark and creepy. It’s set at night in what looks like an abandoned late 19th century city. A little girl drifts around filling up bottles with water and looking into them. She carries an enormous egg tucked under her dress.  A stranger who looks a bit like Elric of Melnibone turns up and they wander about some more. Out of nowhere hundreds of statues of fishermen with whaling harpoons appear, followed by giant fish shadows. The whalers come to life and chase the shadows, throwing harpoons at them. Then it rains a lot and the whole city is submerged. I won’t tell you what happens in the second half, but it is as arbitrary as the first. 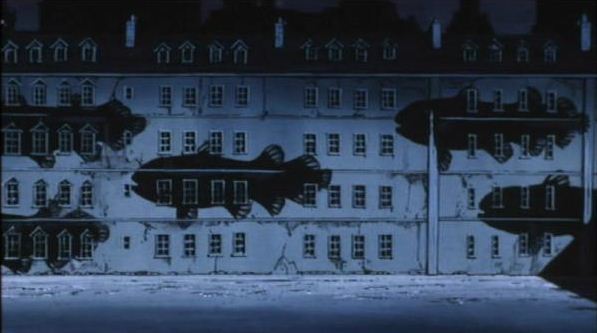 The whole film is effectively an extended dream sequence. For most of the cartoon the girl looks about ten, in the final shots she’s suddenly a fully grown woman. There is very little dialogue and none of it helps the story. Long scenes consist of little more than tracking shots over empty windows and through the dark interiors of the abandoned city. The girl seems largely unfazed by the deeply sinister world she lives in, though the fisherman terrify her. No reason is given for the giant egg she carries, and the sparse dialogue between her and the stranger reveals very little. The end is startling, and I still can’t make sense of the final image despite having watched the movie countless times. 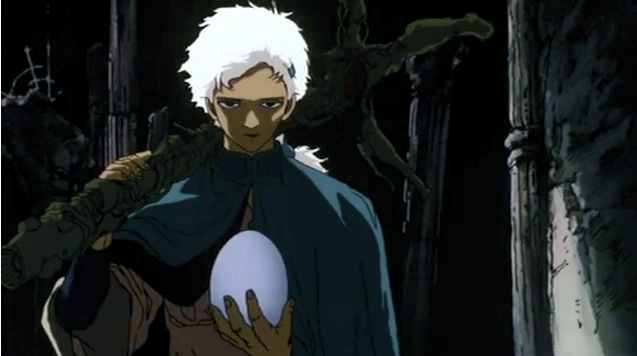 The stranger and the angel’s egg

Apart from Studio Ghibli’s movies and a handful of others I’m not an anime fan. Most are derivative and suffer from the Japanese film’s industry’s tendency to play safe by reworking the same ideas time and time again. However, Tenshi no Tamago is one of the most haunting bits of film I’ve seen and I highly recommend it to anyone who fancies a sleepless night or two.

Update: Someone has uploaded the whole film (just over 1 hour) to Youtube. A bit naughty and I don’t know how long it will be up there,  but people outside Japan can now have a chance to watch it. It’s in Japanese but there’s hardly any dialogue so it doesn’t get in the way. Just enjoy the imagery!

← Worlds of If – part two
Eagle Book of Spacecraft Models →