Alexander Thynn – The King is Dead 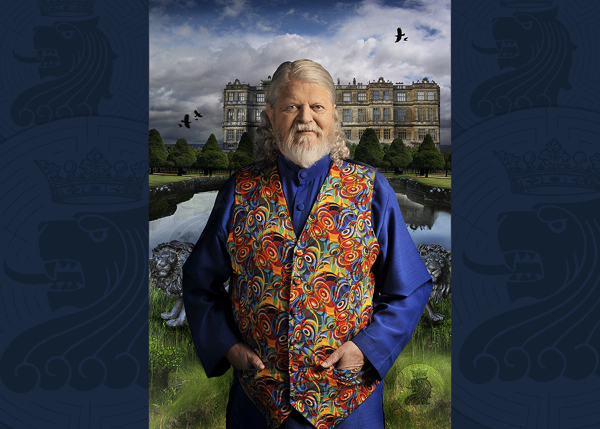 Two reviews stand out on the back of Alexander Thynn’s self-published 1976 epic The King is Dead. Princess Zouina Benhalla (yes she really does exist and you can see her perform her poetry on YouTube) states that ‘La profondeur analytique de sa philosophie font du “Carry Cot” une oeuvre inoubliable.” The other one, by Anonymous of The Times Literary Supplement (this review is sandwiched between comments from The Methodist Recorder and The Wessex UFO Record) runs thus: “To drop in corny old magic, and then to avoid conclusions by a device inadmissible except in the weakest SF, will not do.” You have to admire Alexander Thynn’s bravura for including such a dismissive assessment of his earlier book, probably on the assumption that a sneer from the establishment raises his Bohemian credibility no end. Either that or he was anticipating Lemony Snicket’s clever ploy of putting dire warnings on the back of his A Series of Unfortunate Events telling children they would not enjoy the story inside.

In days of old self-publishing was largely the province of the deluded (like Mr Crabcalf in Mervyn Peake’s Titus Alone who lives surrounded by piles of his remaindered book) or the utterly barmy. Alexander Thynn, 7th Marquess of Bath, (self styled Viscount Weymouth) falls into the latter category. He is one of England’s last great eccentrics, along with King Arthur Uther Pendragon (formerly John Timothy Rothwell). In Japan he would have been given a scroll by the emperor and referred to as a ‘National Living Treasure’. In today’s small-minded Britain only his wealth and status keeps him from being moved on by the police or some other petty Commissar.

Alexander Thynn can’t write. He can’t really paint either, which didn’t stop him from covering the interior of Longleat House with huge murals showing scenes from the Kama Sutra, splattering the walls of an exquisite example of late Elizabethan Architecture with what can only be described as Chagall does Dallas. He studied art in Paris in the 1950s, a milieu in which he is resolutely stuck. Bohemian to a fault he lives on his estate with his wife Anna and a harem consisting of a variety of ‘Wifelets’. The total number of Wifelets stands at 73, though not all at the same time. It’s a mystery to me what the Wifelets get out of this open relationship, or how the Marquess persuades them to hang around. Nevertheless in June 2011 two of them, Trudi Juggernauth Sharma and the rather prosaically named Amanda Doyle came to blows over who had shagging rights for that evening and the police were called.

The King is Dead is a science fiction book by someone who hasn’t a clue about science fiction. Or books. Cheerfully devoid of characterisation, plot, suspense, structure or coherence it is a rambling opus commenting on ‘contemporary anxiety’. It is wonderful. Here’s a brief example of the treasures within, King Askadaz lounges, bored, on his throne in the middle of a palace coup:

It was the mace which had secured his attention this time: quite a massive object, and yet it managed to achieve an interesting, vertical pendulum motion, when pivoted between the knees. He was in the process of regretting in fact, that he had never investigated the possibility of having his own erection inflated to this size. It ought to be scientifically possible, he thought. But then he wondered if his bedmates would like it.

There’s probably a mural in Longleat House depicting just this scene. The King is Dead is a classic, though very hard to find. The cover is one of the Marquess’s own creations, done in what looks like the gold biro you use to sign Christmas cards. Inside is a wonderful Pre-Raphaelite photo of the bearded and ringleted author, moustache ends waxed and possessing a gaze of messianic profundity.

The abiding image I have of Alexander Thynn is from a TV documentary in the early 1980s. It showed him taking a break from painting and Wifelet collecting to chase butterflies on his estate wearing nothing but a pair of flowery underpants and a giant butterfly net. The world will be a smaller, greyer place when he departs. In our materialistic, conformist CCTV society there is little room for these marvellously eccentric relics of the 60s and 70s. Rumours have it that the son will evict the Wifelets and paint over the pornographic murals. Other equally grandiose characters die off, or are moved on by the authorities. England once had a tradition of the non-conformist free thinkers. No matter how wooly the thoughts, their absence will diminish us.

Update: The King is Dead is available on Amazon