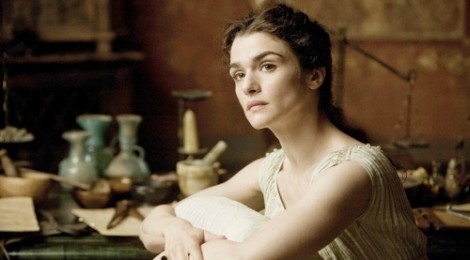 Agora (2009) tells the story of the brilliant philosopher and mathematician Hypatia, who lived in Alexandria at the beginning of the 5th century. Renowned for her learning, she taught astronomy and philosophy and became involved in the politics of the city at a time of emerging tensions between the Christian bishops and the civic government. She was murdered in 415AD by a mob of Christians. Accounts differ, some saying that she was flayed alive with oyster shells before the altar of a newly-sanctified church.

The film is impressive, and it’s a change to see a historical epic with a bit of intelligence, instead of a load of computer enhanced sword play and pompous shouting. Agora also tries to portray the later Roman Empire as accurately as possible, and the result is very convincing. There’s a great scene when a suitor plays a song he has composed for Hypatia at the theatre. Making no concessions to the audience the film, rather than using some anachronistic confection by Lisa Gerrard or Enya, treats us to 5th century Byzantine music in all it’s glory. It sounds like someone beating cats to death with a hammer. As a side note, being into early music I once bought a CD of Byzantine love songs. In the 1990s some 6th century musical scores had been found at the bottom of a well in Cappadocia and a bunch of enterprising musicians set out to recreate the sound. Two minutes in and I realised why the manuscripts had ended up down a well.

What makes the movie work most of all is the obvious connections between now and then. Without labouring the point it essentially portrays a battle between science, the position of women and Christian bigotry. Hypatia is a pagan philosopher who believes in the supremacy of reason. She is also a learned and self-possessed woman who teaches and advises magistrates. Set against her are fanatical Christian monks who, with the backing of Pope Cyril, burn the library of Alexandria, attack the Jewish community and ultimately declare Hypatia a witch (basically for being a woman who speaks out of turn).

The long arm of Life of Brian sometimes appears in the scenes where raggedy monks run around shouting about the Whore of Babylon but on the whole the portrayal of early Christians is pretty accurate. The image of frightened believers huddling in a cellar while Centurions kick the door down is largely a Victorian invention. Early Christians rapidly became notorious for defiling altars, disrupting religious ceremonies and generally being a complete nuisance. Many of them desperately wanted to follow Jesus and be martyred for their faith, and would commit whatever outrages they could to get the desired result at the hands of increasingly exasperated Roman magistrates.

In the end Rachel Weisz steals the film as Hypatia, and she manages to convey the heady excitement of early philosophy without being too simplistic or obscure. The movie neatly has her exploring Aristarchus‘s theory of the Earth revolving round the Sun so the science is not that hard to follow (she gives a great demonstration of an elliptical orbit using two torches, a sandpit and a piece of rope which certainly made the light bulb come on in my head). So, as a portrayal of philosophy, politics and religion in the Later Roman Empire,Agora is a great movie that manages to recreate an important, (if a bit obscure), time while avoiding pompous lecturing or comic-book theatrics.