I stumbled across Cyberpunk when living in Tokyo. This had both its advantages and disadvantages. Half the time it felt like I was living in a true William Gibson world, especially when walking through Shinjuku at night or hanging out in some grungy bar where cyber geeks rubbed shoulders with the Yakuza. Unfortunately it only took a trip down the admin office or the local bank to burst the whole romantic bubble. Corporate samurai only exist in westerner’s heads. In reality you end up sitting opposite hassled Mr Yamamoto who doesn’t know one end of a PC keyboard from another, fills out endless forms in laborious handwriting and then ‘signs’ it with his personal wooden ink stamp. Ordinary day-to-day Japan is disappointingly lo-tech.

Anyway it was here that I stumbled across Aeon Flux. As the title says, this wasn’t the abysmal 2005 film starring Charlize Theron, but the original uber-cool animation series produced by Peter Chung. In the 90s MTV showcased a number of experimental cartoons combining deeply bizarre concepts with weird visuals and generally incomprehensible storylines. The Head (man wakes up with swollen head containing a wise-cracking alien called Roy), The Maxx (homeless man is super rabbit in alternate universe, I think, actually I need to watch it again) and Aeon Flux being three examples. 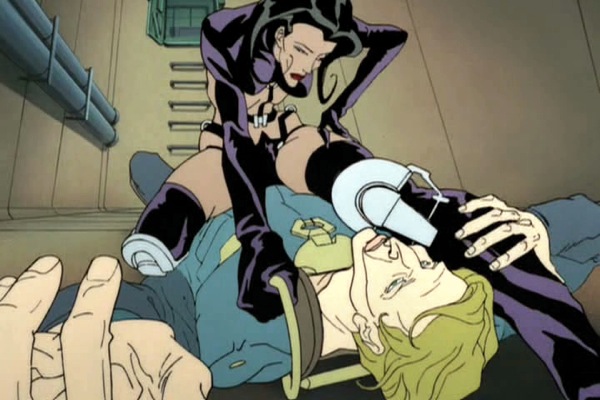 Aeon Flux is set in a dystopian future centred around two nations, Monica and Bregna. The stories largely consist of cat and mouse games between the leader of Bregna, Trevor Goodchild, and the sexy leather-clad (and heavily into S&M) agent Aeon Flux – the two of them clearly have an ongoing love/hate relationship.

The second thing that was odd, especially in the short mini-episodes, was that Aeon died in most stories, usually through some inane trick of fate such as accidentally hanging herself or stepping on a nail and falling to her death. Occasionally her end was deserved, but more often than not there seemed to be no relationship between the plot and her demise.

Indeed, it rapidly becomes clear that Aeon is a nasty piece of work. She is brutal, vindictive and often seems quite stupid. Trevor Goodchild concocts endless schemes, some of which do seem to have a noble aim (for example, in The Purge he creates artificial consciences to make people good). Aeon seeks to deliberately destroy each one, driven by nothing more than an anarchic impulse to cross Trevor, while blowing things up and shooting people. In the end you sympathise with Goodchild. Despite the fact that Aeon exudes sex and has a voice like melted chocolate, you just want him to execute the malevolent bugger and have done with it.

Finally the stories frequently elide into the completely surreal. To give an example, in the episode Utopia or Deuteranopia? Trevor Goodchild has kidnapped the previous ruler of Bregna, Clavius, and created a boudoir inside the man’s body (stay with me here) where he plans to have sex with Aeon Flux. At one point he gets lost and ends up at the end of a red-velvet lined corridor (again, inside Clavius) looking out across a wooded landscape. You really don’t want to be watching this late at night. Peter Chung would frequently take standard action scenarios (Aeon storming a fortress and killing lots of people) beyond the point of absurdity (she kills so many Monican guards that the entire complex ends up waist deep in blood). The plots frequently implode on themselves, becoming incomprehensible, but the whole series exudes such style and intelligence that you don’t really care.

Sadly the live action film Aeon Flux (2005), starring Charlize Theron, eclipsed the original series with what can only be (politely) described as a steaming heap of crap. Type in Aeon Flux into Google and you’re bombarded with photos of Theron in black spandex interspersed with one or two pieces of artwork from the cartoons. I don’t want to dignify the movie by dwelling on it here, Peter Chung’s response to the premiere was that the film made him “feel helpless, humiliated, and sad”.

Fortunately the complete series is available on DVD, and can be ordered from Amazon. If you like anything to do with animation, Cyberpunk (or even Egon Schiele) I highly recommend it.