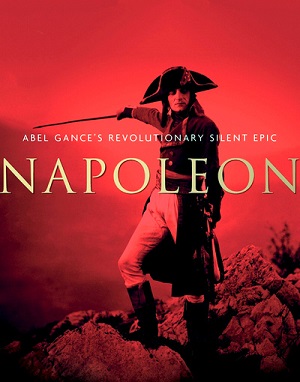 Looking at the practicalities of even showing Abel Gance’s Napoleon makes you wonder how on earth it ever got made. Not only is the full version five and a half hours long but at the very end the film goes tryptych – with three images projected simultaneously side by side to give a stunning split screen effect. Nowadays all you need is a wide-screen projector and a copy of Adobe Premiere to get the same visuals, but in the mid-twenties the epic finale demanded three aligned projectors and a full orchestra to do it justice.

The second problem the movie was up against was the The Jazz Singer – which understandably wiped the floor with every single silent film going. Within two years Napoleon had virtually sunk without a trace, eclipsed by Al Jolson in blackface murdering his tinny way through a handful of sentimental songs.

Having fallen in love with Napoleon after finding a couple of reels in a market as a child,  the film historian Kevin Brownlow set out to piece together a full version of this lost masterpiece from the various releases. Full-blown performances of the restored film started in the early 1980s, and over the years each new version added more lost footage until, at the end 2016, a virtually complete five and half hour edition appeared on DVD, complete with an original orchestral score composed by Colin Davis.

Abel Gance’s Napoleon is a truly astonishing film, not least because of its constant experimentation with the camera, and its often immaculately composed visuals, although these aren’t consistent throughout the entire marathon. The movie is a series of set pieces, more or less self-contained, showing scenes from the life of the young Bonaparte (played with steely-eyed constipation by Albert Dieudonné).

Stand out sequences include the snowball fight at the military school where the future emperor spent his childhood. Hand-held camera, montage and fast-cutting interposing close-ups with the action, deliver the kind of images you wouldn’t see until the rise of realism in the cinema of the early 70s. Nowadays shaky documentary-style camerawork is de rigueur, but in 1927 it was ground-breaking, as were the more studied and intimately dramatic scenes showing Napoleon navigating his way through the Reign of Terror, or the death of Marat (played with grotesque intensity by Antoine Artaud, the dramatist responsible for  the Theatre of Cruelty).

And of course the final set-piece is jaw-dropping by any film standards. Napoleon takes over the demoralised French army in Italy and whips them up into battle readiness in the space of twenty-four hours. The final sequence uses the triptych screen, not only to give huge panoramic shots of the army against the mountains, but also to juxtapose images and shots to drive home the portrait of Napoleon as a man of destiny who triumphs by force of will alone. Unsurprisingly Eisenstein claimed that Abel Gance was a major influence on his own montage techniques, and given that the overall theme of the movie is resolutely fascist, it’s also possible to spot the seeds of Leni Riefenstahl’s Triumph of the Will in the earlier movie.

Inevitably the politics makes it an uneasy watch, although it’s nowhere as unpleasant as the (to my mind unwatchable) Birth of a Nation. There’s little over-arching plot to speak of – merely the irresistible rise of a domineering personality who only has to fix someone with his steely gaze to have them fall to their knees and start hallucinating eagles. Having said that, interesting subplots abound – the politics of the Revolution (with Abel Gance himself choosing to play the notorious ‘Angel of Death’ Saint-Just), the servant Violine’s idolisation of Bonaparte (who she prays to nightly), and there are some genuinely heart-wrenching moments, which is remarkable given that we’re dealing with a black and white silent film 90 years old. My favourite is when Napoleon confronts the ghosts of the Revolution in the empty National Assembly chamber. 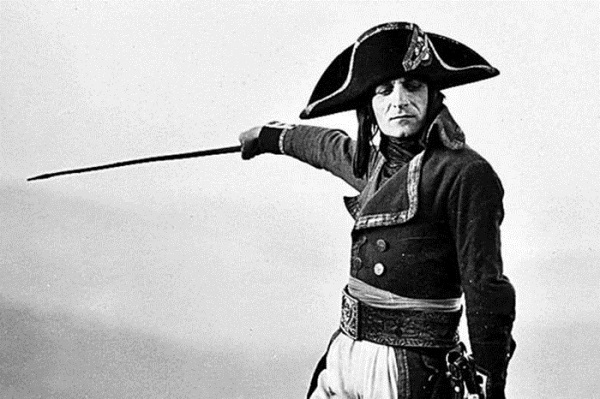 Abel Gance’s Napoleon is a colossal folly – unshowable at any ordinary venue. You can only really watch it in bursts, though in the age of series binge-viewing it’s easy to treat it more like a mini-series than one massive sprawling piece of art. Anyone with any interest in cinema should give it a go, especially in the superb quality restoration now available from the BFI