A thousand miles an hour – the Bloodhound SSC

This week I attended a one-day education conference in Lancaster House, hosted by the British Government as part of the diplomatic activities surrounding the Olympic Games. I spent a while chatting to Wing Commander Andy Green who is the current land speed record holder. In 1997 he reached 763 miles an hour in the car Thrust SSC.

He’s now preparing to break that record in the Bloodhound SSC (Bloodhound supersonic car), which he will attempt to drive at a 1,000 miles per hour. The project involves some breathtaking engineering and Andy Green really will be entering unknown territory. The motivation behind the attempt is to try to recreate the ‘Apollo effect’ in education. During the moon landings there was a surge in Physics and Engineering Ph.Ds in America as the Apollo program captured the imaginations of US students. The Bloodhound project wants to do the same, so there’s a whole outreach program to schools designed to stoke kids’ enthusiasm for the mind-blowing engineering that the project is developing.

To give some idea of the extreme science involved here’s some of the more dramatic facts about the Bloodhound SSC:

1. The main jet engine is from a Eurofighter. In addition the car also has a hybrid rocket so the car will actually be able to outrace one of the planes.

2. The fuel pump alone is the engine from a Formula 1 racing car.

3. When the car accelerates Andy will be hit by a force of 2.5G, on deceleration it’ll be 3G in the opposite direction.

4. The wheels have to rotate at over 10,000 RPM, creating a stress force of 50,000G at the wheel rims (to put that in perspective, the gravitational force on the surface of the Sun is about 30G). 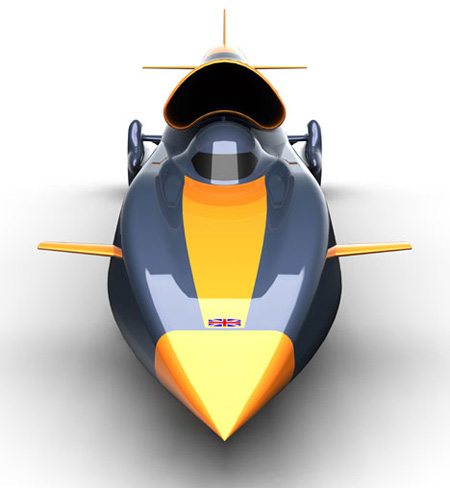 Basically because no-one has driven a car at this speed once it gets above the current record it’s entering unknown territory. Flying a plane or a rocket at 1000 miles an hour is relatively easy because you have the same medium above and below the vehicle. With a supersonic car the ground is a few inches below the chassis and calculating the aerodynamics between the body, the wheels and the earth’s surface is a massive mathematical challenge.

The car will be driven on Hakskeen Pan in South Africa, the only salt lake large enough for the car to complete its 10 mile run. A team of 300 people spent months picking up every stone larger than a tiny pebble to make sure that the surface will be perfectly smooth.

The official website for the Bloodhound project is here: www.bloodhoundssc.com

To give you an idea of the challenges and amazing science behind the project here’s a video:

A simulation of the race between the Bloodhound and a Eurofighter

At the conference Andy Green showed us a video of a test run on the salt lake. Two things were absolutely amazing, firstly the lake is so flat you could see the curvature of the earth. As the car appeared in the distance, coming towards the camera, it popped over the horizon. Secondly it outruns its own sound, so when it drives past it’s silent. The ear-splitting din comes a few seconds later!