Many years ago I bought a facsimile leather late medieval wallet and coin purse from the Louvre shop in Charles de Gaulle airport. The wallet was useless. When you closed it up all your ducats fell out, but the purse was brilliant. Fill it full of coins and it was ideal for tossing onto a tavern table with a satisfying thump when buying Conan the Barbarian’s services for the weekend. Well, after five years it started to fall apart so I’ve been looking for a new one but the Louvre seemed to have stopped making them.

Fortunately I came across Crossman Crafts run by archeological illustrator Peter Crossman, who specialises in making authentic equipment from Pre-Roman times to the English Civil War era, and he made this fantastic medieval leather purse for me. 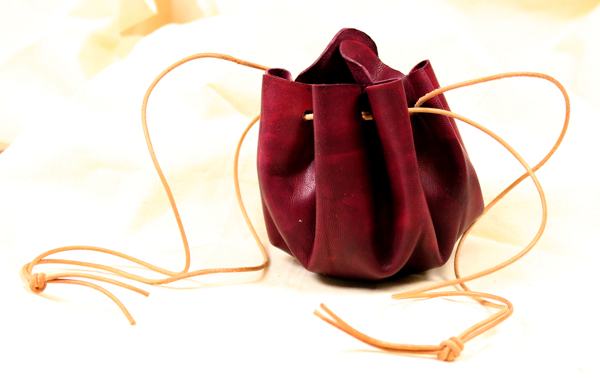 It’s cut from fine calf skin stained with a dye preparation. The thong is round leather (Peter offered me the option of more authentic square cut thongs) and the bag itself has two ears to make it easier to pull apart. At the moment the leather is stiff but once it’s softer I can keep my change in it. With the first one it was always a bit of a faff paying for things compared to fishing a handful of coins out of your pocket but it was a talking point, and looked pretty cool (to me and others with an interest in things medieval/renaissance anyway).

Here’s a picture of Peter making a wooden comb and looking like he’s just stepped out of Peasant Wedding Feast (1568) by Pieter Bruegel the Elder. This is at a living history demonstration, I don’t think that’s his normal work wear. He’s produced props for film and TV series (for example, The Tudors) and for Museums, including Hampton Court Palace in Richmond, London. To give you an idea of the kind of thing he works on here’s a sample of his upcoming projects:

“Another job I have on at present is causing me no less difficulty – a pair of medieval leather dog collars with suitable buckles and studs, to be carried out on a budget! I hope to finish them over the weekend and move on to some other projects… bronze thimbles, a wooden pestle, a boxwood comb, and horn dice.”

Please check out his website to see the range of historical artefacts he makes and sells for very reasonable prices.

A short while ago I wrote about King John’s House in Romsey. I managed to get access to the interior and take some photos of the 13th century graffiti I talked about. Here’s the upper room, with its wooden beam ceiling. 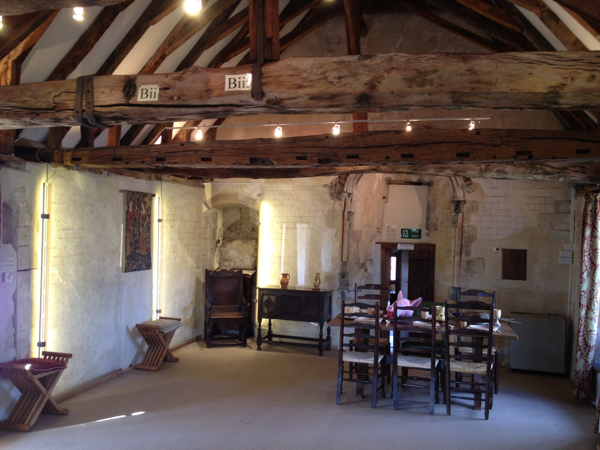 The walls are covered in cuts and scratch marks, presumably from when drunk lords started waving their swords about or decided to test the points of their daggers. Here are two examples of King John’s knights’ artistic endeavours. 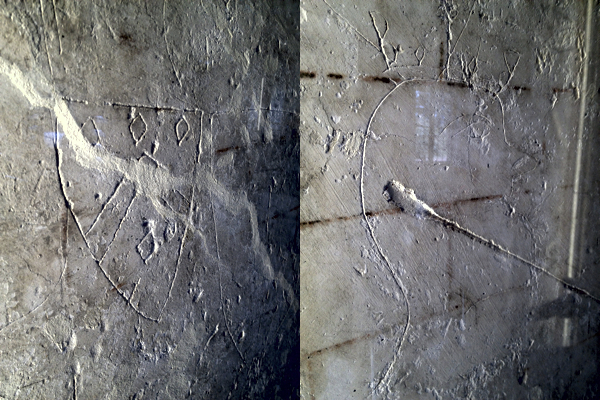 As I said before, they were generally illiterate so they scratched heraldic coats of arms into the plaster. This is early medieval so the arms are relatively simple. It wasn’t till later that the nobles started quartering their shields and putting in all sorts of fancy stuff like rampant griffons and camelopard’s couchant with roses sticking out of their ears. The final picture seems to be an attempt at a profile of a man with a crown, possibly John himself. However the artist seems to have passed out in a puddle of mead (or been dragged away by his more sensible friends) before he completed the chin, hence the absence of a neck and the long gouge over the top of the image.